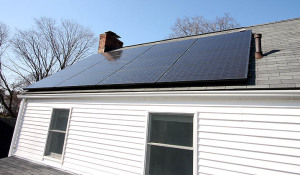 Our first electric bill since turning on our solar system is here and it’s even better than we expected! The pre-installation assessment estimated that we’d generate about 40% of our power, but we’re actually generating about two-thirds!

During the same period last year, we bought 410 kWH, resulting in a bill of $78.89. This year, we’re using less than 1/3 of that. So, in addition to generating the majority of our power, the solar panels have helped us to become more mindful of our consumption :)

We’ve become slightly neurotic about our electricity usage. We bought a Kill A Watt meter and have been testing every electrical device in our house, seeking out secret offenders. We’ve had quite a few surprises; I’ll post on that later.