Chicken marsala has long been one of my favorite dishes. When I stopped eating chicken, I invented this recipe which uses tempeh instead.

I usually serve it with mashed potatoes or brown rice, but I was out of both, so I served it with white rice. 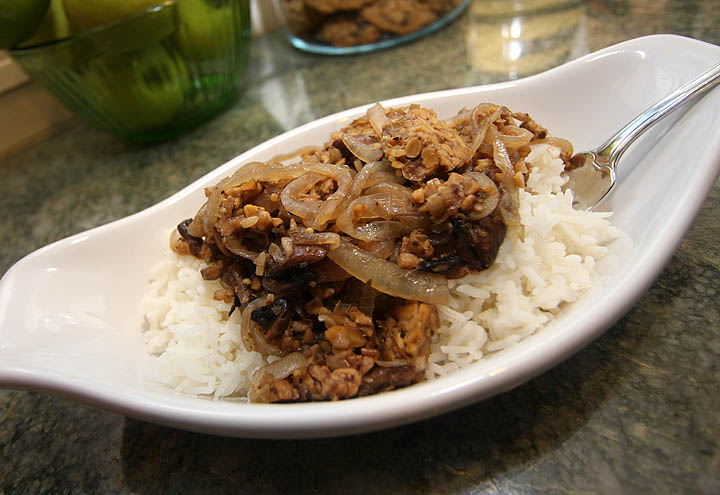 8 oz tempeh, sliced
2 medium onions, sliced
1 lb baby bella mushrooms, sliced
2 garlic cloves, pressed
3/4 cup marsala wine
2 t oregano
olive oil
salt
pepper
Saute the onions in a bit of olive oil until they’re golden brown and carmelized. Add the mushrooms and cook them until they darken. Remove them from the pan and set them aside.

Add the garlic and tempeh to the pan, and saute until the tempeh is browned and starting to crisp. Add 1/2 cup marsala wine and simmer until the liquid is reduced by half. Add the oregano, onions, mushrooms, remaining marsala, and salt and pepper to taste. Stir to combine and cook until most of the marsala is absorbed.