After much sorting and editing, here’s a peek into my latest adventure abroad… 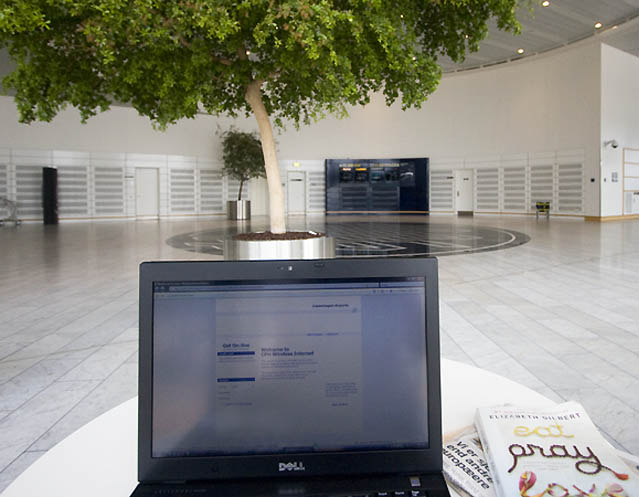 Corporate travel consistently books me on a connecting flight that leaves out of a different terminal 35 minutes after my overnight flight lands. If, by some miracle, I clear customs and security and make the flight, my luggage doesn’t.

This time, we were delayed out of Newark due to storms, so I missed my connection and had to wait 4 hours for the next flight. I spent those hours camped out here with my laptop and Eat, Pray, Love, a book I thoroughly enjoyed. 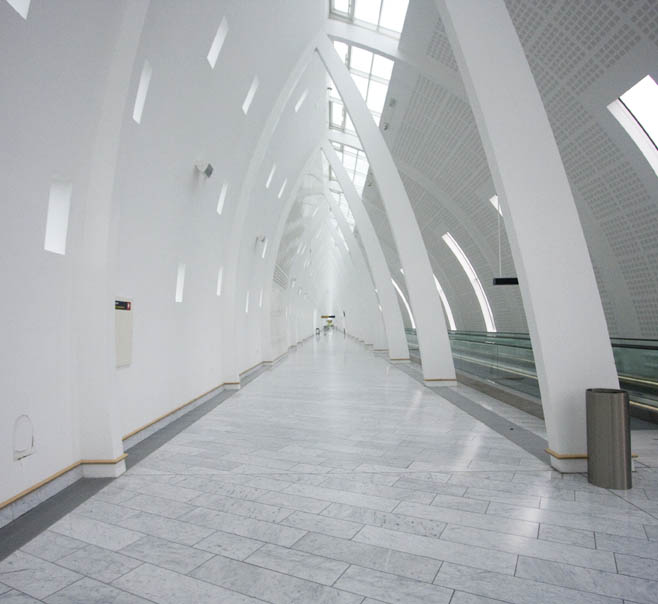 My connecting flight usually leaves out of the gate that’s located at the end of this terminal. It’s a small terminal mostly for propeller planes, and it’s always empty. Early in the morning with only the sound of my footsteps, it’s something out of Clockwork Orange, yet striking and completely Scandinavian in design. 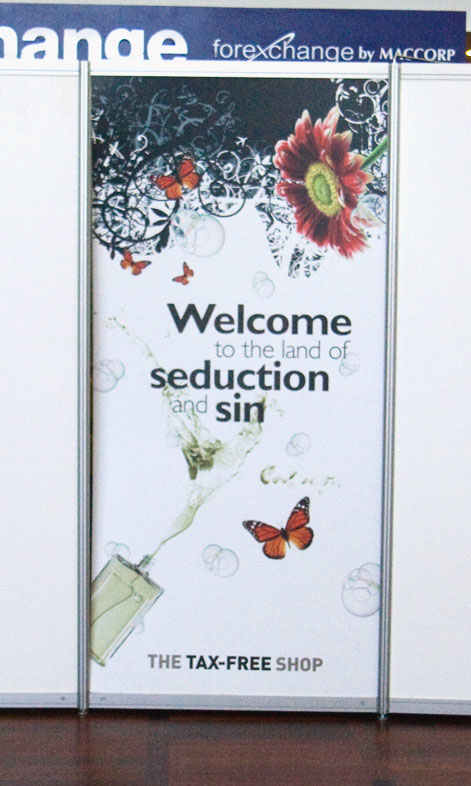 This is a sign in the Copenhagen airport. More like “land of false promises”! Not that I was looking for seduction or sin, but if I were, I think I’d be hard pressed to find it there, in an airport tax-free shop… 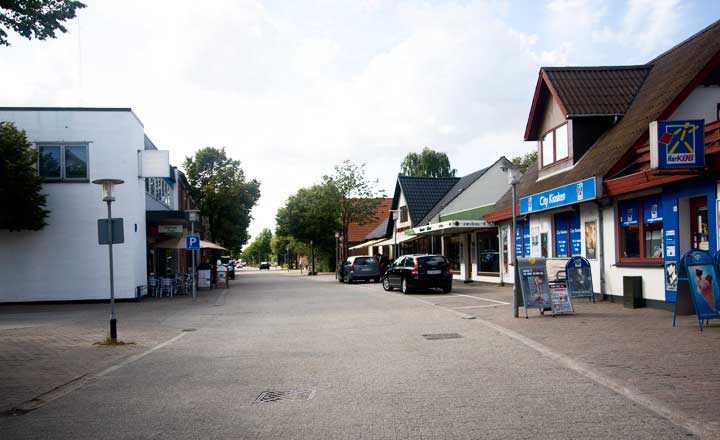 I’ve said before that I find these trips desolate, but how can they feel any other way when I’m traveling alone to someplace so empty? 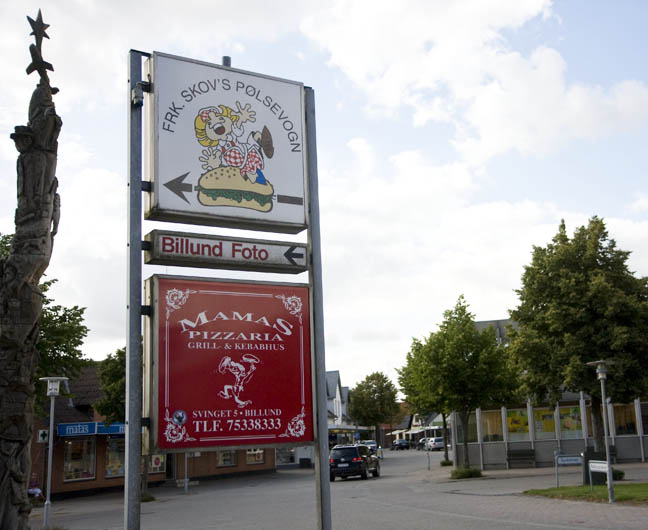 Ah, Mamas Pizzaria! This tiny town has a least 3 pizza places, and not much else. I’ve never tried Mamas because I was warned early on in my Denmark travels that eating at Mama’s Pizza would ensure that I’d be crying for my Mama a few hours later. It would take a lot to make me cry for such a horrible woman, but I’m not one to take these sorts of chances, so I’ll take my coworker’s word for it and avoid Mamas at all costs ;) 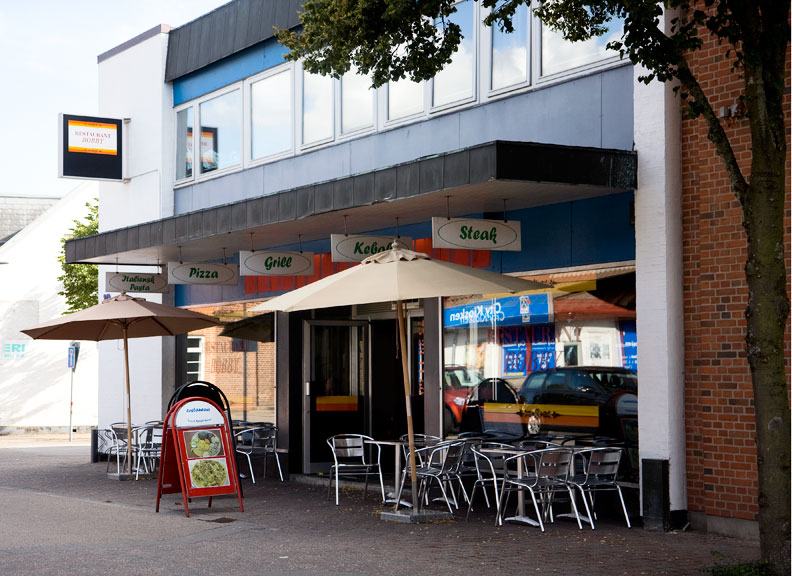 As a vegetarian in pork country, with Mamas off the table, I’ve got limited options, but a couple trips ago, someone told me about Restaurant Bobby, aka the Falafel Emporium. If there’s falafel in town, I don’t really need much else, especially it if comes with a side of fries! With the exception of airplane food, two salads, a Pepsi from the mini bar, and an untold number of espresso shots at the office, Restaurant Bobby provided all sustenance during my stay. 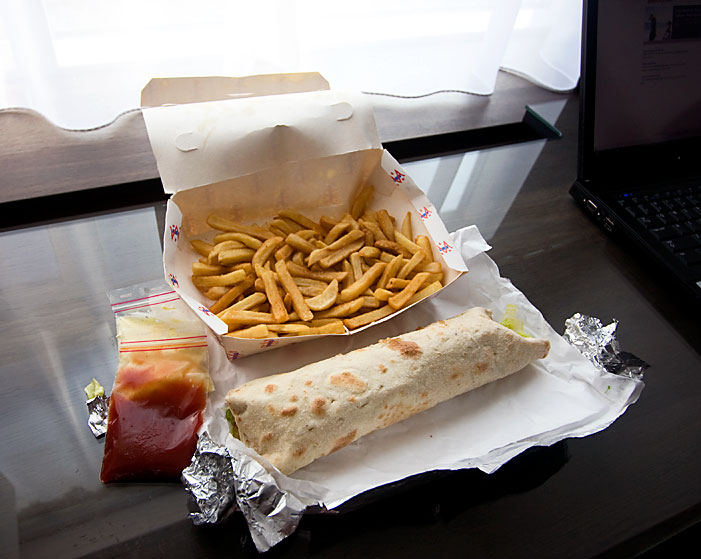 The 114, pommes frites… falafel wrapped in a soft, warm tortilla with lettuce, tomato, cucumber, and tzatziki with a side of fries, all for the bargain (not!) price of about $16. 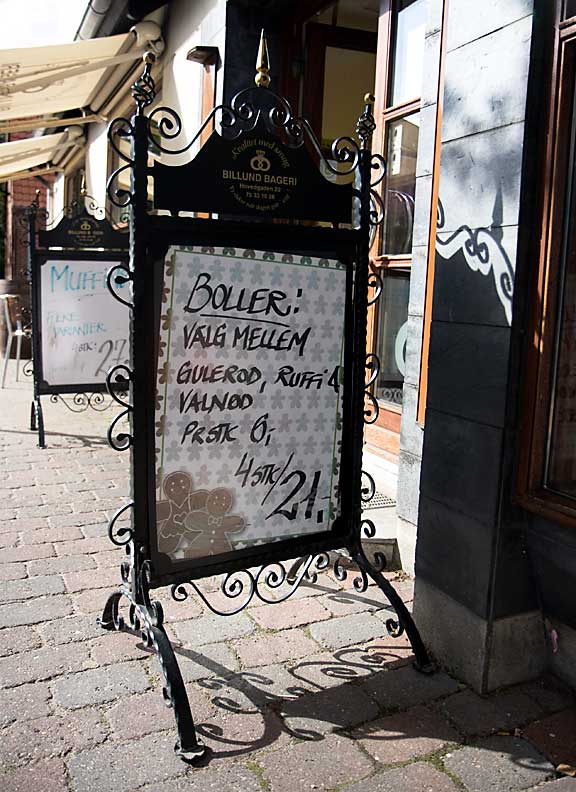 Across from Restaurant Bobby is Billund Bageri, which appears to have the most delightful baked goods. Someday, I will sample them, but I generally don’t make it downtown until after work and having not eaten all day, I’m not to be trusted in a European pastry shop! 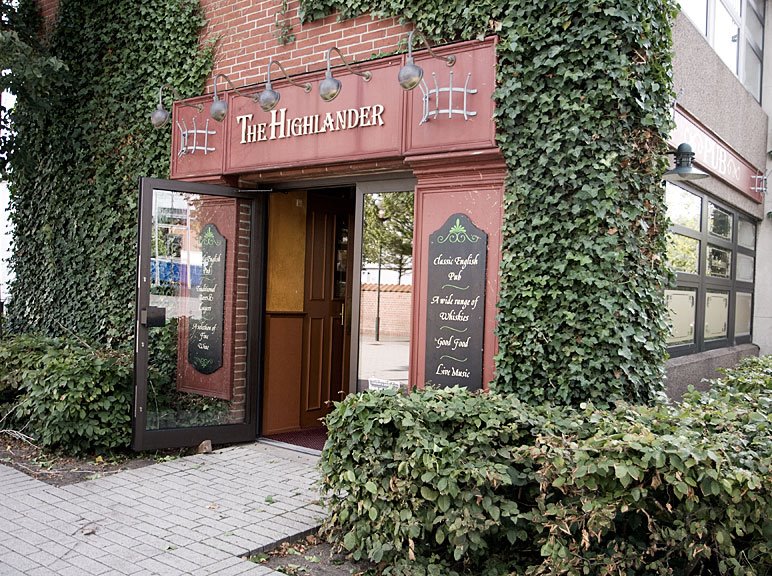 The Highlander is an English Pub and aside from the hotel bars, it has been the only in-town option for a night out. Apparently there is also a new brew house. I was invited to join my colleagues there after work, but somehow, I managed to get lost in the quarter mile between the office and this rumored brew house, so next time they will assign me an escort :) 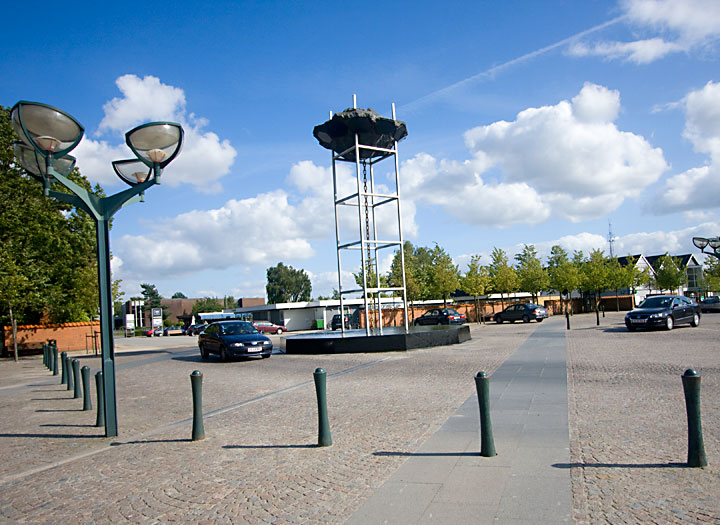 One of the things I find odd about driving in Denmark is that I often feel like I’m driving places I shouldn’t. Take this town center for instance, it took me at least 3 trips to work up the nerve to drive over the cobblestones, and around the fountain to where the falafel is! In the US, those little barriers would be meant to keep cars out, not in! 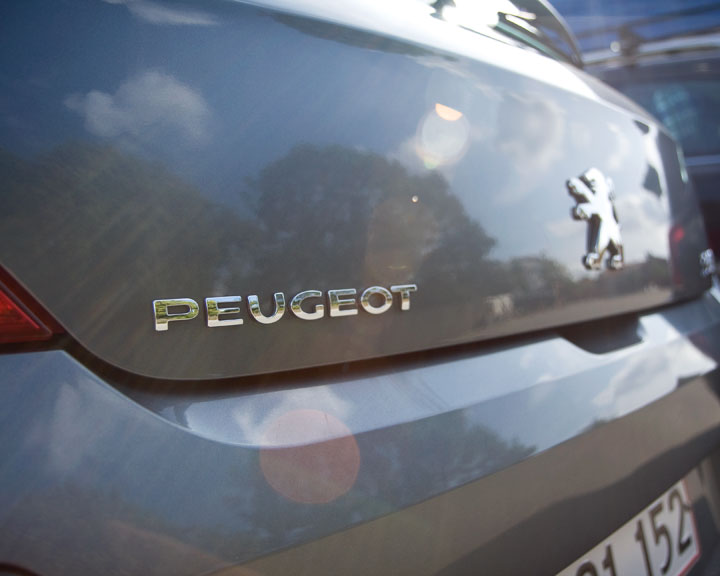 Speaking of driving places I shouldn’t, I somehow managed to drive the rental car over a boulder (don’t ask!). Yes, I scraped the car, but I had full coverage and I haven’t heard from the car rental place; let’s hope it stays that way. For the record, a Peugeot 308 is most definitely more than “10 centimeters” longer than a Toyota Yaris. The guy at the car rental place has no one to blame but himself for this. 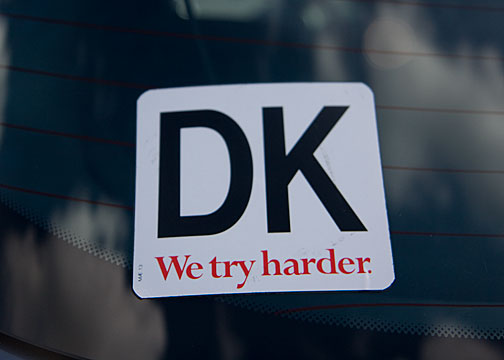 This sticker was in the back window of the rental car. I’m not sure what they try harder at, but it’s nice that they do :) 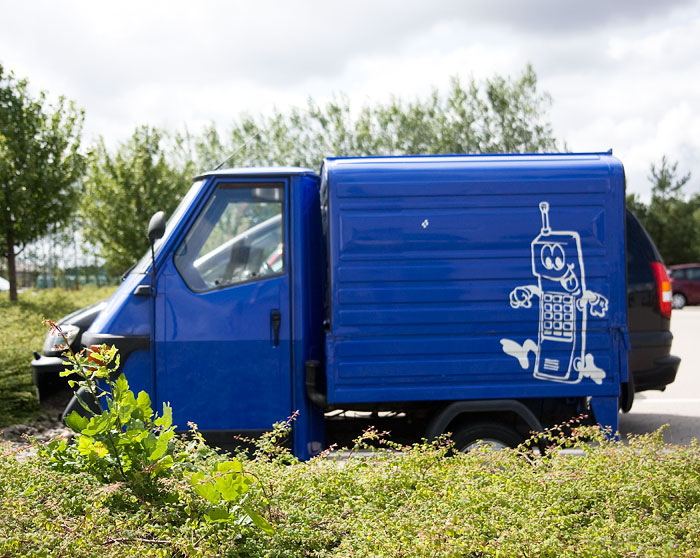 This goofy little vehicle was parked outside a building where I had a meeting one morning. It’s some sort of food delivery service. The image made me smile. 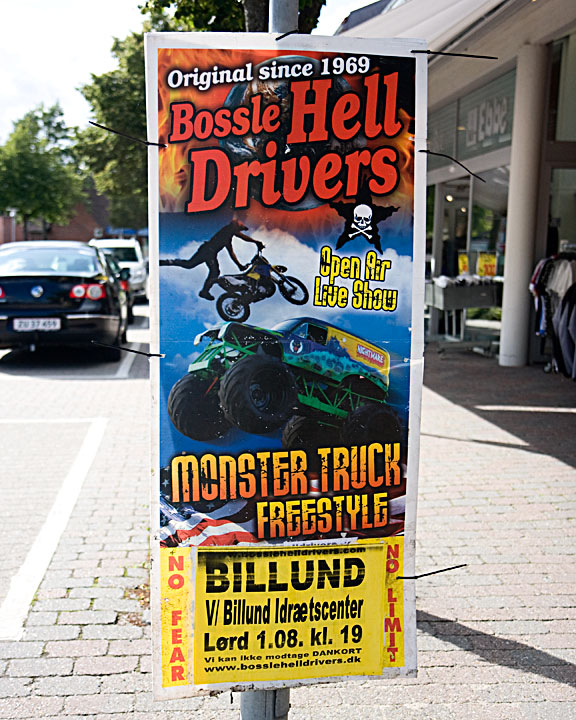 In my fantasyland of European refinement, there are no monster trucks, only great wine, unrivaled pastries, and perfectly brewed coffee. That’s completely untrue, because the Bossle Hell Drivers are coming, and apparently have been coming since 1969…go figure! 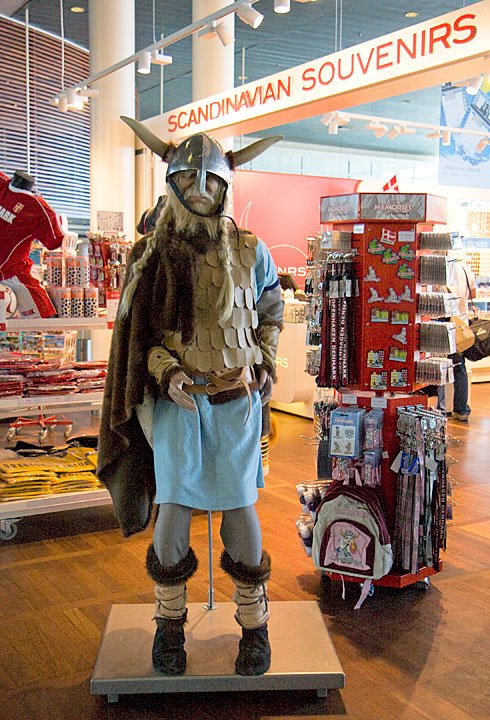 So there you have it—a week in the life of a globetrotting Web Diva that was every bit as boring as it looks :)