I’m back from Denmark. For now. I brought my camera, but didn’t get to take any photos because it rained for 14 days straight. Seriously. According to official stats, there were 3 hours of sunshine the entire time I was there.

I can’t believe Thanksgiving is next week! It feels like everything is swirling around me and I’m just struggling to hang on so I don’t get swept away by all of it. Must stay grounded. I was supposed to have next week off from work, but my Monday has already been claimed, so let’s hope I can salvage the remaining 4 days.

There’s not much magic happening in the kitchen these days. As I write this, I’m eating raisin bran and soymilk for dinner. But I did want to share this quick recipe, which is one I often turn to when I’m short on time.

This veggie sandwich was inspired by the grinders (or subs, depending on where you’re from) that I used to order from pizza places before I discovered how easy it is to make them at home. 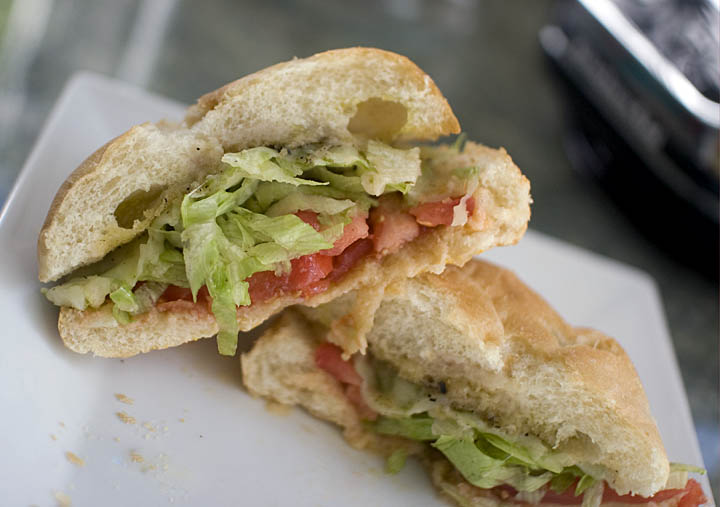 crusty bread
(I use rolls or baguette)
provolone
shredded lettuce
sliced onion
sliced tomato
sliced black olives
sliced green peppers
(or fire roasted red peppers)
red wine vinegar
olive oil
oregano
salt
freshly ground pepper
Slice the bread in half and sprinkle each half with the vinegar, then the oil. Sprinkle with oregano, salt and pepper. Place a slice of provolone on the bottom half and stack it with all of the veggies, except the lettuce. Put that half in a toaster oven or under the broiler until the cheese begins to melt, then top it with the lettuce and another slice of cheese. Put it, and the top half of the bread back in the oven and bake/broil until the cheese melts.

If I’m using a baguette, I don’t cut it all the way through, I keep the top and bottom halves hinged and bake it all at once. It’s fine, but with rolls, it’s easy to get the top half too toasted. I sometimes add mushrooms, pickles, or whatever I have on hand, and I sometimes skip either the top or bottom cheese, but it’s really extra delicious if you use both :)