Here it is… this is the post where I confess that I’ve moved to Europe and realized the horror of American food. It’s more cliche than I’m comfortable with, and I haven’t officially moved, but it’s not any less true.

I had the food situation in Denmark all wrong. Granted, many of the restaurants aren’t very good, but the food I’ve been enjoying in people’s homes is amazing!

It started with a delicious pumpkin soup, made with fresh pumpkin because canned pumpkin is unheard of here. Then there was a delicious veggie soup that unfortunately doesn’t have a recipe, but may very well be the best soup in the world, making the recipe situation all the more tragic. Then there was the Thai veggie soup, lentil loaf, beetroot soup, pasta with creamy pesto, bread with herb infused olive oil, homemade crepes with nutella and raspberries, and French cheeses (served at room temperature; hard cheeses on their own, soft cheeses on baguette).

The more I eat, and the more I read labels, the more I realize that Denmark’s “regular” grocery stores are kind of like Whole Foods, but with fewer obscure ingredients, soy-based and processed foods, and organics. 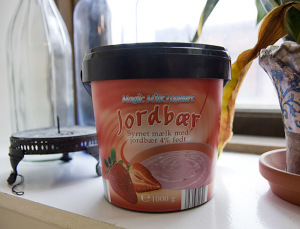 It’s so nice to not have to shop vigilantly to avoid HFCS because it simply doesn’t exist here, and for the most part, neither does lowfat or nonfat. Cooking with whole, minimally processed ingredients makes a huge difference, and my hosts all tell me to always cook with love…