Whether or not I ship a car to Denmark, I will still need a bike. Gas is nearly $8/gallon, so I’m planning to drive only when it’s absolutely necessary, or more cost effective than paying $6 each way for the bus.

A few years ago, I found a bike at the curb on trash night, and Jeff overhauled into a really cute pseudo-English bike. It’s been a good bike, and I’m bringing it with me, but I really need something internally geared since I will most likely be riding in a dress from time to time. And I can’t trust a picked from the trash bike to stand up to daily use.

I’ve always loved classic English and Dutch city bikes, and I used to think that given an excuse, buying a Pashley Princess Sovereign would be a no brainer, but now faced with the reality, I’m not so sure. 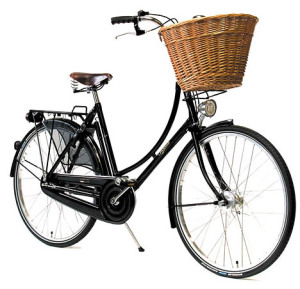 I love this bike, but it’s got a steep price tag and I’m afraid it’s a little too nice. It kind of reminds me of my Audi TT, it was love at first sight, but every scratch felt like a tragedy and I was afraid to park it anywhere. That’s not the mention the unwanted attention I’ve attraced by driving such a flashy car; it’s really not that great. Eventually, I garaged the TT and bought a Toyota Yaris for everyday driving, taking the TT out only a few times a year when the weather was just right for top down cruising. 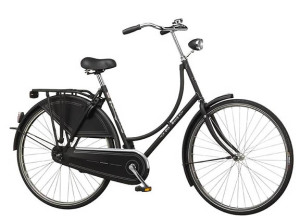 The Batavus is a true Dutch city bike, and it costs a bit less than the Pashley, but I’m just not into it. The light looks cheap. The seat looks cheap. The handlebars look cheap. It’s got dorky coaster brakes, and where the heck is the basket supposed to go? It’s OK, but I know I’ll always sort of wish I’d gotten the Pashley.

Then there’s the Schwinn. It’s less than half the price of the Pashley, it has 2 more speeds than the Pashley, and even has shocks, but something about the frame is too mountain-bikey for me, and I’m afraid I’ll stand out as an American with a crappy American bike, who wishes she’d gotten the Pashley.

There are many more city bike options in Denmark, but everything is so expensive there and I’d probably end up paying more than the Pashley price there for something not as good. But this is another example of what I love about Europe… simple living and classic style are the norm, rather than the exception.