I want an Azor Oma! It’s a Dutch bike, even more expensive than the Pashley (figures!), but less flashy and built to last forever and a day. 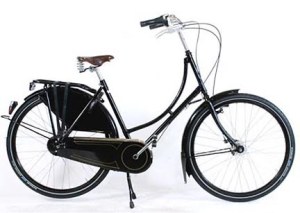 I think my affinity for city bikes actually began on a trip to Amsterdam when I was a teenager, so it would make perfect sense to buy a Dutch bike!

I’m going back to Denmark next week, so I’ll do some field research, visit some bike shops, and make a decision. It’s really difficult to choose a bike without actually riding it, but these city bikes unfortunately have limited distribution in the US, so I’d have to buy it sight unseen, which is a bit scary when I’m looking at spending a couple grand on a bike!

I also suspect there might be a premium involved for getting a Euro bike stateside, so it’s possible, though not probable that even with 25% MOMs, it might be cheaper to buy it overseas.