A few weeks ago, I was unsure of the Easter egg situation in Denmark. I’m still kind of unsure because even though I didn’t actually look for them, I didn’t come across any egg decorating kits, ads for egg decorating kits, or sales on egg decorating kits. Easter is not nearly as commercial here as in the US.
Two grocery stores were completely sold out of eggs, but I’m not sure if that’s because people dye them or eat them for Easter brunch. I was going to make egg salad for my week’s lunches, however, due to the egg shortage, I settled on hummus.
But the real point of this post is to talk about Kinder eggs! 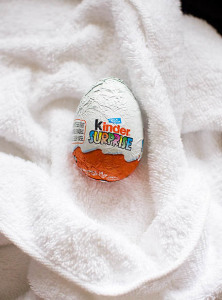 I brought Reese’s peanut butter eggs for my European friends, and in return, they gave me a Kinder egg… 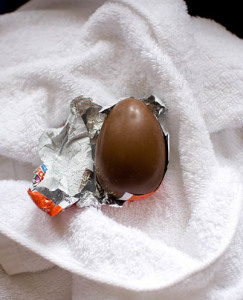 I’m definitely a dark chocolate girl (for the health benefits, of course) but “kinder” does mean “children” and children tend to prefer milk chocolate, so who am I to complain? 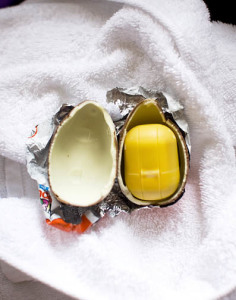 This is some of the coolest chocolate ever because it’s thin, and it bends! And it’s delicious, probably because the milk chocolate is lined with white chocolate, and none of it contains corn syrup. But I’m a texture junkie, and this was fun to eat! 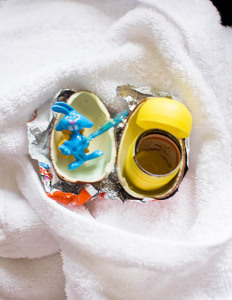 Inside the little capsule was an actual toy! This is shocking to me because I grew up on Cracker Jacks and saw the prizes go from plastic magnifying glasses, to books of jokes and temporary tattoos, to the crap they give out now which is like a paper decoration for the end of your pencil!

Too cool, and these are apparently available year round. Nice!

Not so nice though is the fact that Kinder eggs are banned in the United States due to the fact that the toys are considered a choking hazard. Last year, US Customs & Border Protection seized more than 25,ooo Kinder eggs. It’s nice to see they’re keeping the country safe!