Today, people from France, Norway, Germany, and the UK got together with a small group of Americans in Denmark to celebrate American Independence Day in the most traditional of ways! 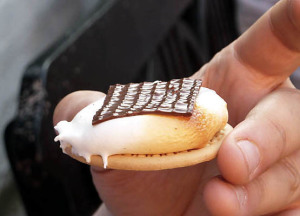 This being Denmark, they were served smørrebrød-style (open faced). We used Marie biscuits instead of graham crackers and pålægschokolade, instead of Hershey’s big bars.

As a vegetarian, I generally opt out of marshsmallow eating, but curiosity got the better of me so I had a little taste and found them to be softer with much more vanilla flavor than I recall of American marshmallows.

It’s light here until around 11 PM and it’s a school night for expats, so alas, there were no fireworks, but it was nice to observe this summer tradition among friends from the other side of the pond.