I’ve long coveted the Pashley Princess Sovereign, so when I gave up both of my cars and moved to Denmark, you’d think it would’ve been an easy choice.

But, I’m a planner, an analyzer, and often, an overthinker. Over the past few months, I’ve talked myself in and out of so many bikes, that it borders on neurosis!

When it finally came time to pull the trigger, I rationalized that an expensive bike would be a liability. I reasoned that I should be practical and buy something I wouldn’t stress about leaving at the train station or the bus stop, or about riding on rainy days.

So, I ordered a junker built in Holland from a bike shop in Germany. It has fenders, an enclosed chaincase, an integrated lock, skirt guards, dynamo lights, and I thought it was a bargain at 280 €, but I hate this bike with a passion! 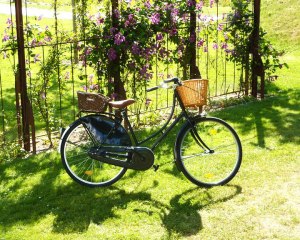 The first time I rode it, my thighs were on fire, I was parched and on the verge of an asthma attack, I was sweating like crazy despite it being a cool morning, kids were passing me, and one even rung her bell at me. I am a runner, I was a success story in a fitness infomercial, I am not out of shape, so it was a great mystery to me why this thing was so hard to pedal in first gear, and why it was so slow that if it had taken me 30 seconds longer to lock it up, I’d have missed my bus.

Turns out, the front brake was rubbing, so I was pretty much riding with the brakes on. Not wanting to suffer the indignity of bringing this heap of junk to a bike shop to have the brakes adjusted, I tried to fix it myself.

I found several tutorials online and a did a pretty decent job of stopping the rubbing, even if I did absentmindedly toss the screwdriver, and in the process scratch the top of my MacBook Pro, which had somehow made it nearly a year and many transatlantic treks without so much as a blemish. But I digress…

The next morning, it was riding OK, but got progressively worse. The brake pads had slipped back into their old position. I tried in vain to fix them for good, but in the end, took it to a bike shop, where the nice mechanic adjusted them free of charge, lectured me on the pitfalls of cheap bikes as primary transportation, and showed me some better options. Point taken.

The next issue is the kickstand, which was supposed to be the traditional Dutch style back kickstand which makes it much less likely to tip. Only instead it has a weak side kickstand that visibly bends when I have anything of weight in the baskets.

According to the bike shop, I should be thrilled because the bike I ordered wasn’t available and they substituted a much better bike. If that’s the case, I’d really hate to see the bike I actually ordered, but they eventually agreed to send me a back kickstand.

When the back kickstand arrived, it was actually a whole new back cargo rack with a kickstand attached. I didn’t realize until I’d taken the old rack off that there’s a bar on my bike frame that blocks the rear kickstand from going up and down. So, I pretty much wasted an entire Saturday afternoon taking apart the back of my bike, only to reassemble it exactly as it was, while my friends were at the beach. As I was doing this, I dropped a nut into the chaincase and for some unexplainable reason, now the chain is slipping.

Finally, I need to mention the dynamo lights which don’t have a clear on and off position, I just sort of bend the dynamo in and out of contact with the wheel and no matter what I do, it’s mostly not in enough contact with the wheel to actually work. And the skirt guards slip if I go over a bump or any sort of textured terrain, which is highly convenient in Denmark where cobblestones abound :)

The kicker in all of this is that the bike I found in the trash and that Jeff restored for me is a much better bike, only I can’t ride it everyday because it doesn’t have an enclosed chaincase and I often ride in a dress.

So, after all of that, I’ve decided to spring for the Pashley, which is easier said than done, but more on that later. I don’t have it yet, but she’s shipped and should be here soon :)

Oh, and for the record the Dutch junker came from fahrrad-ass.de They sell on Ebay as fahrrad-ass and are nice enough to deal with, but their bikes are total crap!

On the bright side, some Japanese tourists asked if they could take photos of it in the park today, so at least it looks cool :)