I love Mexican food but there’s only one Mexican restaurant in this city. I’ll admit that one is better than none, but they charge well over $20 US for a veggie burrito. It’s an ok burrito, but it’s not mindblowingly delicious, and I doubt it will star in any of my future food fantasies.

In the absence of Taco Bell, or a reasonably priced Mexican restaurant, I’ve been making my own Mexican food at home. All things considered, these veggie enchiladas aren’t too bad from a fat and calories standpoint, and they’re muy delicioso… 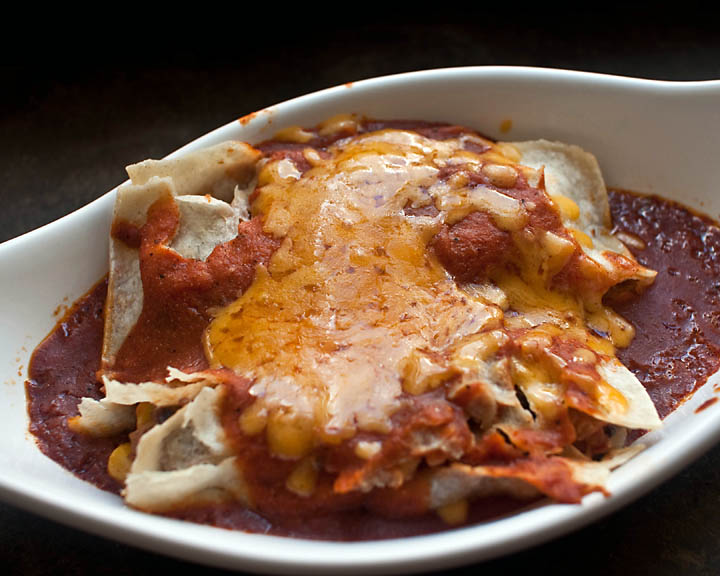 The chances of finding canned enchilada sauce in Denmark fall somewhere between slim and none, so I make my own.

Melt the butter in a sauce pan, then add the flour, and brown to make a roux. Add the spices/seasonings and tomato paste, stir until blended with the roux. Gradually add the veggie stock, stirring constantly and bring to a boil. Reduce heat and simmer, stirring occasionally, until it thickens.

Heat a bit of olive oil in a skillet, then add the onion and pepper and cook for a couple minutes. Add the garlic, cumin, and oregano and continue to cook until the onions and peppers are soft.

Spray a large baking pan with cooking spray, then coat the bottom with enchilada sauce. Spoon the filling mixture down the middle of each tortilla, then roll closed, leaving the ends open and place them seam side down in the baking dish.

Pour the rest of the enchilada sauce over the top. Cover and bake at 350 degrees for 25 – 30 minutes, or until it starts bubbling. Sprinkle with shredded cheddar and bake uncovered until the cheese melts.