It’s kind of ridiculous how much I love this cat. He was actually supposed to go to someone else, but some kittens are too fragile and the one I was planning to take left us earlier than expected—so my sister gave me Opie instead. I’d always wanted a ginger cat, but I choose my pets on the basis of need, not looks and so I was happy to take in the last baby in the litter who needed a home.

I’ve had Opie since he was 5 weeks old and he’s totally the best free thing I’ve ever gotten! I tell him he needs to take care of himself because he’s awesome and I want at least 20 years with him.

He’s a teddy bear. He sleeps snuggled up next to me and he purrs so loud that it wakes me up. He helps me stay in shape by lying on my yoga mat, curling up on my bench, or trying to snuggle up with me during ab work. He waits outside of the shower, and once when he was a kitten, he fell into my bubble bath. He’s always at the door when I come in—even if I just went to take out the trash or check the mail. He sits with me every morning as I get ready for work. I talk to him and he talks back. He follows me around, he helps me cook, he catches bugs, and tonight when I was working late at home, he was alternately on the table touching me with his paws, and snuggled up in his bed at my feet.

He’s got a thick, beautiful, soft coat and loves to be combed and petted, until he doesn’t—then he bites me. Well, he doesn’t actually bite me, it’s more that he puts his teeth on me to let me know that he could bite me if he wanted to :) He hisses at visiting kids, then hides under the bed. If I’m late to feed him he carries on like he’s starving to death, and it feels so good to save his life ;) 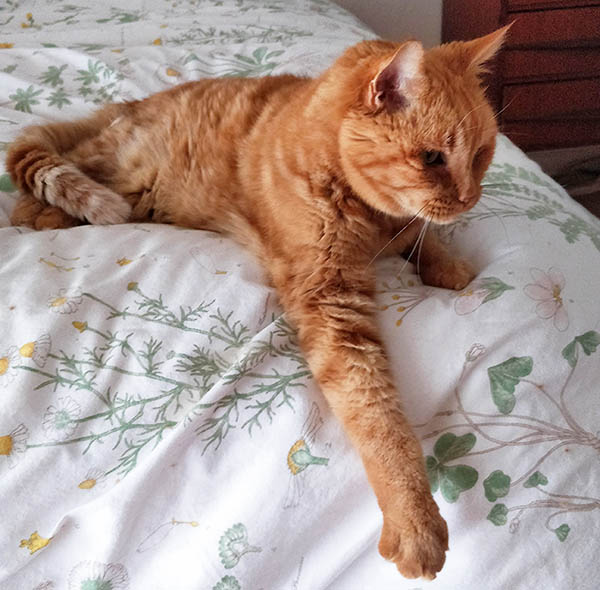 Opie was born about about 4 months after my grandfather died. My grandfather raised me from the time I was nine and I’ve said “goodnight” to him every night since he left us. After 8 years, I still miss him terribly, and wish he could visit me in Denmark and that I could take him to Italy, or wherever he’d like to go. I’m not sure where I stand on angels, heaven, and all of that, but Opie brings such joy to my life that I often wonder if he’s a gift from my grandfather.