Normally, I wouldn’t go to a cat show, but my friend just bought a show quality kitten from Russia and I went with him to inspect the show circuit. Really, I just went along as moral support, but the promise of kittens and hot chocolate definitely helped.

I’m sort of at odds about this whole thing. Cats are being euthanized by the millions due to a shortage of homes, so I’d never entertain the thought of buying one, no matter how special it is. I really don’t care if Opie is too short, too fat, has substandard markings, a badly shaped head, a tail of unacceptable length, weird paws, ugly ears, or is a mix of 10 different dumpster breeds. A cat is a cat and no amount of papers or ribbons is going to change my mind.

Throughout cat show, I just kept thinking “pageant moms!” I’ve never seen so much primping and fluffing in my life. I actually saw someone putting baby powder on a white cat to make it appear whiter. That is the level of crazy we’re dealing with here!

I got a lot of sideways looks for taking photos, so I had to be sneaky and they’re not up to my usual standards, but you’ve got to see this…

Every cat had some sort of Princess dressing on its cage. There was a vendor selling these things for about $120 US. I wonder how big of a niche this is because they’re a pretty easy sew! 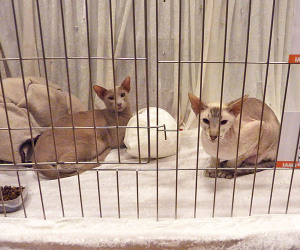 I don’t mean to talk smack about poor, helpless cats, but are they cuter than Opie? Didn’t think so. Beauty is definitely in the eye of the beholder.

I noticed that everyone standing near the judging tables was holding their cats in this same awkward position. This is to show off the cat’s length, the longer the better! Who knew?

It’s a good thing Opie isn’t show quality because he’d most definitely bite me and run away if I tried to hold him like this in a gymnasium full of people.

For the most part, the cats were pretty compliant with the judging process. It must have something to do with good breeding :)

$20 US bottles of shampoo to enhance the color of your cat’s coat, the one on the right is volumizing, and there is also creme rinse and a variety of styling aids. It’s best to shampoo your cat about 5 days prior to showing, so some of the natural oils have a chance to come back. I can’t believe I know this! 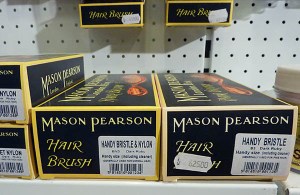 I own a Mason Pearson hairbrush and I deliberated for several months before justifying a $125 US hairbrush. I noticed at the show that these are the standard among the beautiful cats of the world, and now I feel like true Princess ;)

Not really. Actually, I’m wondering if I bought myself a very expensive cat brush, and I’m pondering whether or not Prince Opie is handsome enough to warrant such a fancy grooming implement.

If you’re going to the hassle of shampooing your cat with color-appropriate shampoo, creme rinse, styling product, and a good going over with a Mason Pearson hairbrush, for goodness sake, do not screw up its grooming with an improper blow out!!! This fancy machine is a cat blow drier and it costs a mere $1,000 or so US. Isn’t Fluffy worth it?

Remember the baby powder people from beginning of this post? Well, apparently, they’re not alone because for about $20 US, you can buy concealer of sorts for under your white cat’s eyes. Really, who wants to look at stained fur? 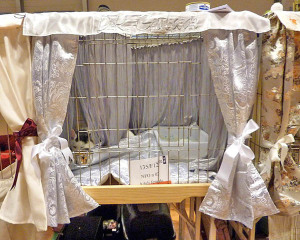 I’ve written this post mostly in jest, but I found the whole thing quite sad. Not just because people are spoiling show cats when so many others are being killed for no good reason, but because the photo above pretty much sums this up from the cat’s perspective.

At the back left of the cage, you can see that the poor cat is trying to hide itself from the show traffic. Purebred or not, it’s still just a cat and cats like to sleep and they like to be cuddled. They do not like to be bathed, primped, held on stretched arms, inspected, or made to spend their days in cages while people look at them like some sort of bizarre specimens of perfection.

January may find me on the show circuit with my friend and his gourmet kitten. With or without me, he will show this cat, so I may as well join him for the ride!

Next post is back on the topic of Italy, Trevi Fountain sounds good…