Thank you for all of your lovely comments on my Thanksgiving post! I’m feeling much better and I had the best ever Thanksgiving today!

It was wonderful to taste familiar foods so far from home. Our hostess, Tara always delights and today was no exception… she made the best mashed potatoes I’ve ever tasted, and pecan, pumpkin, and apple pies all from scratch, including the crust!!! Respect.

She even managed to track down a turkey! It was obscenely expensive by American standards and according to her husband it still had some feathers on its legs. It looked so moist and delicious that it was a little bit tempting, but I behaved.

I brought along my controversial green bean casserole and it was a hit. Yep, even Europeans appreciate a nice, trashy GBC ;) I threw in a batch of cornbread for good measure and there wasn’t a crumb left. So fun to share American foods and traditions with friends on this side of the pond! Tara and I asked for requests from the group and next we’ll be introducing them to egg nog :)

We watched the Charlie Brown Thanksgiving special, and a History Channel Thanksgiving documentary. We nicknamed our lone Danish friend “Squanto” for helping us navigate life here in Denmark, and it really did feel like a Thanksgiving TV special. Hallmark Channel, are you listening??

Due to a glitch in planning, I wasn’t able to get my cream of mushroom soup in time for today’s festivities. Life is so different when you don’t have a car and the only way to get hold of something like the aforementioned soup is to walk a few kilometers in the snow to pick it up. So I had to improvise a bit.

It was actually pretty simple and probably much healthier than the canned stuff anyway, so in case you’re ever in a pinch, here’s the recipe for cream of mushroom soup substitute.

Melt the butter over medium heat, gradually stir in the flour to make a roux. Remove from heat and slowly stir in the boullion and milk, return to heat and cook, stirring constantly until the mixture is smooth and thick, like the consistency of condensed, canned cream of mushroom soup.

You may have noticed that the mushrooms are sorely lacking here. This is because I thought I still had a can of mushrooms in my US stash, but I didn’t. Most stores are closed on Sundays in Denmark, so I had to skip the mushrooms. It was still fine, though given a choice, I’d have sauteed some chopped mushrooms and stirred them in at the end. 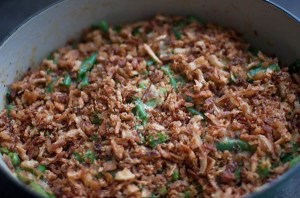 I had a bit of a goose chase yesterday trying to find the right green beans. As with most things, Denmark’s canned vegetable selection is not exactly up to par. One store had canned haricots verts, but that just didn’t seem right.

The frozen vegetable selection is not much better than the canned selection. One day, I actually picked the broccoli out of a broccoli, cauliflower, carrot mix in order to make a quiche. Today, I ended up using frozen haricots verts that I defrosted and cut to mimic cut green beans.

I’ve already established that books like “French Women Don’t Get Fat” and “Entre Nous: A Woman’s Guide To Finding Her Inner French Girl” are pretty much written for women who want to feel chic despite the fact that they will never go to France or meet a French woman. So this other “French” stuff is also a bit suspect.

Next post is back to Italy, I promise! Too many cool things and beautiful photos not to share :)