If I had to be picky, I’d say the one place Italy disappointed was in the area of food. I know, I know, I must be crazy, right?

To Italy’s credit, I’ve never been a big fan of pasta. Even as a student, I’ve never “lived on” pasta, I much prefer potatoes. I love a good manicotti, but let’s face it, that’s more about the cheese than the pasta.

In Italy, I had pasta exactly twice, more out of a feeling of obligation than real desire. The first dish had tomatoes and roasted aubergine (which used to be “eggplant” until I moved to Denmark and decided I prefer its European name), but it didn’t even begin to appease until I’d buried it in freshly grated cheese. The second was a delicate spinach and ricotta filled ravioli with pesto and pine nuts, which was much better :)

I ate enough caprese panini and pizza margherita to last several lifetimes. It got so boring that I actually ate Indian three times… Indian, in Rome!!! Crazy!

But as a pasta averse vegetarian, my options were somewhat limited. Authentic Italian food isn’t like the Italian American food I grew up on, there was a lot of ham and guts. Yes, guts… like tripe, brains, intestines, and oxtail.

I’m feeling like maybe I haven’t given pasta a fair chance, so I’m going to give it another try and see if I can’t make friends. Of course, given my potato habit and the abundance of potatoes in Denmark, I’m not sure I need to make friends with another white food. But in most Danish restaurants, vegetarian = pasta so it wouldn’t hurt to learn to enjoy it now and then instead of just sulking and picking out the good stuff. 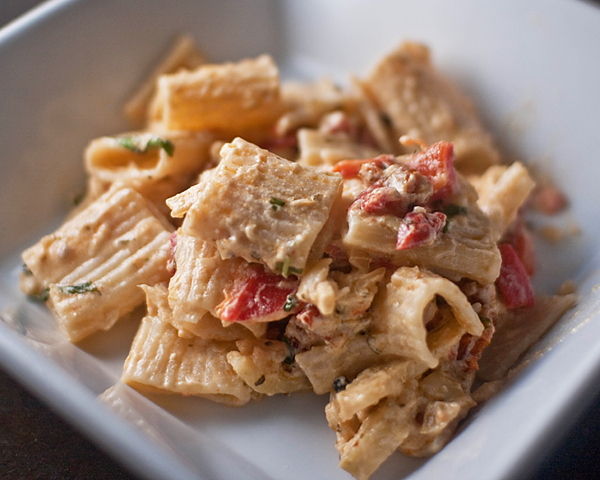 1 lb. pasta
olive oil
3 garlic cloves, pressed
1/2 cup chopped onions
1 cup chopped sundried tomatoes
7 0z. chopped roasted red peppers
1 jar water packed artichoke hearts, sliced
1/2 cup grated parmesan
1 cup creme fraiche
chopped fresh basil leaves
salt
pepper
white wine
Cook and set aside the pasta. Saute the garlic and onion in a bit of olive oil until the onion is translucent. Add the sundried tomatoes and roasted red peppers, cook for a few minutes, then add the artichoke hearts and cook another few minutes. Stir in the grated Parmesan and creme fraiche and heat through. Add the basil (as much as makes you happy), season with salt and pepper, then add to the pasta. Stir to combine over medium-low heat and finish with white wine to thin the sauce.

It wasn’t quite love for me, but it was quite good, and if you like pasta, I think this could be your dish!