Part of the fun of traveling is meeting different characters.

My favorite character from Rome is The Armani Guy, who was running one of the Rome tourist scams, though I’ve yet to figure out exactly what his deal was. I’d read up on Rome tourist scams ahead of time, so I was prepared for the Gladiators, the Vatican tour people, and the “can I put my memory card in your camera to take a photo?” people, but I was not at all prepared for The Armani Guy.

I was walking down Via Cavour enroute to the Colosseum and the Palatine when a old guy in a junker of a car pulled over and asked if I spoke English. Figuring he was going to ask directions, I said, “yes, but I don’t know how to get anywhere.” As if he couldn’t tell by the camera gear and sensible shoes that there was a pretty good chance I was not from around there.

Instead of asking for directions (which is probably the usual drill), he asked if I’d heard of Armani, and of course everyone has heard of Armani! Then, he pulled out a binder filled with plastic sleeves of tattered Armani ads that had been torn from magazines and told me that he worked for Armani in Milan. Right, like Armani can’t afford glossies!

This was getting interesting, and I was wondering if he was about to ask 5’2″ thirtysomething me if I’d ever considered modeling.

Next he asked my height (well, isn’t he predictable?). I said, “short,” and he pulled a plastic bag out of the backseat, took out a black pleather jacket and told me it was a sample from Armani’s new leather line and that if I promised not to sell it or give it away, he’d like me to have it as a gift to take back to America to remember my time in Rome.

Yeah, whatever, dude. Before I could pull out the “I’m a vegetarian and that much leather makes me queasy” line, he suddenly noticed that he was running out of gas and being out of cash, he asked if I could give him a few Euros.

Another one of the Rome tourist scams revealed and I was out of there in a hot minute with another travel story to tell!

Normally, I’d have kept walking, but it was broad daylight and there were tons of people around, so I kept my distance from the car and decided to see what was up. 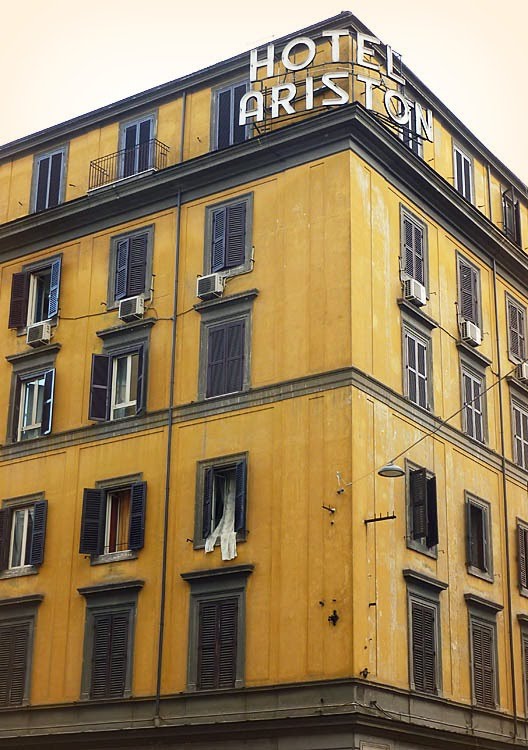 This photo doesn’t have anything to do with the story or with Rome tourist scams on general, but I didn’t want ramble on and expect you to read about Mr. Armani without providing a pretty picture. So here you are… Hotel Ariston, one of the first things I saw when I arrived in Rome.

I hadn’t even checked into my hotel when this was taken, but those curtains hanging out of the window just begged to photographed :)