The Vatican was a bit of a controversial destination for me. I’d initially planned to skip it, but when it Rome… it seems silly to skip the Vatican!

I was raised Catholic and don’t have particularly fond memories of the experience. My grandmother forced me to make my Confirmation to ensure I’d be allowed allowed to marry in the Catholic Church. I was always pretty sure I didn’t want kids (strike 1!), wasn’t sure I wanted to marry (strike 2!), but if I did, I wanted an outdoor wedding, and I definitely wasn’t interested in marrying anyone who would insist on a Catholic ceremony (strike 3!).

The fact that I went through with it even though I knew it wasn’t in line with my beliefs still causes me trauma from time to time. If the Church had any integrity, they’d have thought twice about confirming me after I’d gone head to head on birth control with the Bishop at my Confirmation retreat. But I suspect they prayed for the best and hoped I’d grow out of it.

Guilt and I have a longstanding relationship. Guilt has controlled me, pushed me into stupid decisions, and at times crippled me, but now I’m learning after many hours of rational thought and soul searching that life does not need to be a guilt trip. Despite what I’ve been led to believe by my rosary clutching grandma and the Catholic Church, I am not a bad person and there are much cooler places to visit than Guilt City.

I am breaking up with guilt.

As I was growing up, the Pope and The Vatican figured heavily into my life. Most nights, I ate dinner while looking at one of those awful Pope John Paul II collector plates and listening to my grandmother lecturing me on how to “act like a lady” or the laundry list of my supposed sins which would range from not studying hard enough, to wearing a mascara, to being overweight, to wearing my skirts too short, to much worse things like wanting to date when I was 16.

So, I didn’t know how it would be to cross enemy lines. Turns out it was neither traumatic nor religious, just another sight to be seen and photographed. 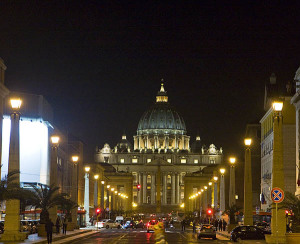 It was quite breathtaking to stand in the Piazza San Pietro and see Michelangelo’s dome in person, but I did not have any sort of epiphany, and so the war on guilt continues ;)

I didn’t visit the Vatican Museums. The queues ensure it’s an all day event and it’s quite spendy to hire a tour guide in order to skip the queue. Structured sightseeing isn’t really my style anyway. Instead of ratting off a list of museums I’ve visited, and artwork I’ve seen, I’d much rather take photos and tell you how a place feels.

I now have a solid grasp on the vibe of Berlin, Copenhagen, Rome, and Siena, with so many more to come!