Steep, narrow cobblestone streets lined with the most beautiful ancient row houses and shops you can imagine. Vespas, churches, a clocktower, galleries, a piazza, olive groves, and fountains.

Surrounded by an ancient wall, Siena is pretty much everything I’ve imagined an ancient European city would be.

One of my favorite places in Siena is a café called Quattro Cantoni. Its high arched ceiling and plaster work is stunning, the cappuccino is definitely worth writing home about, and the clientele is an interesting mix of locals and tourists.

My favorite locals were the old woman who wore a fur collared coat and came in early each evening for a cocktail and an ice cream, sometimes followed by an espresso. And “the professor” who took a seat at a table in the center of the cafe, read his newspaper and sipped a martini in his turtleneck and blazer with leather patches on the elbows.

Even if this place were to close tomorrow, I swear it would still smell like coffee in 50 years. Amazing!

I found Quattro Cantoni my first morning in Siena. I’d skipped dinner the night before, so naturally, I had to have 2 panini…

One pomodoro, and one with grilled aubergine and fresh mozzarella!
What? I was famished! And for the record, I did skip the cannoli that I regret skipping. 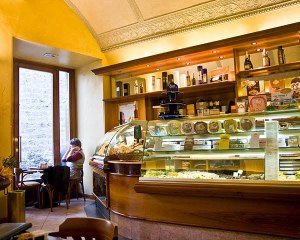 After that, I found it hard to leave. There have been a handful of places in my life that have had a vibe that I can’t explain, other than to say that I felt like I belonged there. Some kind of past life thing? I don’t know. Like I said, it’s hard to explain.

If I ever get around to writing the book that’s been bouncing around my head these past few years; and if that book is a success; and if I can live on royalties or at least get an advance to go somewhere and write another book, I will go to Siena. I’ll rent a flat in one of those delightful rowhouses. I’ll buy Vespa and a pair of fabulous boots, I’ll become a regular at Quattro Cantoni, and I will wonder how I got so lucky.

A girl can dream. A girl should dream. Last time I dreamed, it came true…