Patong was the low point of my trip. That’ll teach me to retrofit my itinerary the night before I leave!

My first thought was to skip Phuket entirely, but since I’d already bought a non-refundable plane ticket from Bangkok, I thought it made sense to at least go check it out for a couple of days. Talk about penny wise and pound foolish!

I tried to make the most of it, but mostly I just waited around until the glorious moment I was to leave for Chiang Mai. One day in, I tried to get an earlier flight to Chiang Mai, but I missed the change cutoff by a few hours. So, I ended up wasting an additional two days in the tourist trap from hell.

If you look carefully at the blue massage sign, you’ll see it says, “no sex”. That’s because Patong Beach is the sort of place where they need to spell out that kind of thing. 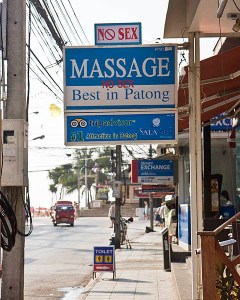 There were hookers on the street, and so-called “sweetheart bars” where the lonely can go for some “quality” female companionship. To each their own, that wasn’t really the issue. It was more the tourist trap vibe of the whole place.

I could not walk more than a few meters without someone asking where I’m from; if I’d like to have “designer” clothing made; if I’d like a massage; if I’d like to buy a laser pointer, electronic cigarette, wooden frog, counterfeit handbag, sunglasses, or watch; if I needed a taxi or tuk-tuk; if I’d eaten; if I wanted to see a ping-pong show, etc.

Trucks with advertising on the sides drove around all day and night hawking their tourist experiences via loud speaker at a few decibels louder than necessary. My favorite was the one with 4 bony teenage looking guys on the top, trying to look tough whilst luring the masses to their Thai boxing arena. Unfortunately, I was too busy thinking about how silly they looked to remember to take a photo :(

The competition for restaurant patrons is so stiff that they’d hover around the sample menu and try to coerce people into their restaurants. One guy got irate with me because I didn’t want to eat his one vegetarian dish, which was stir fried vegetables with soy sauce. This was vacation, not fat camp, would it have killed him to throw in some tofu or something a little more tasty than soy sauce? I had the worst falafel of my life at Shawarma Express. I finally found an ok Indian place on a back street that had decent but overpriced aloo gobi, a pretty good tamarind chutney, and cheap beer.

Shopping was an even more frustrating experience than dining. I get that it’s a tourist area, but come on! One woman started at 1,850 baht and promptly dropped her price to 500, based on Bangkok prices, 300 baht would’ve been an ok, not great deal. Another wouldn’t go below 500 baht for the same dress, different pattern that I bought in Bangkok for 179. This scenario repeated over and over until I gave up and only spent on food.

Patong Beach is nothing to write home about. It was overcrowded and swarming with people trying to sell me jet ski rentals, beach chair rentals, parasailing, boat rides, etc. Nevermind that I was wearing a sundress and carrying a camera with a giant zoom lens, which I’m sure they would have taken real good care of while I was out in the water ;)

Obviously there are prettier and quieter beaches in Phuket. But I am not a beach person and Phuket just isn’t my thing.

There were a few nice moments in Patong… my hotel was an amazing deal and run by lovely people, I fed a colony of stray cats, snuggled a family of kittens, ate an amazing crepe with chocolate and fresh coconut from a street vendor, and found a great little spot to hang out and play Jenga in the afternoons. Still, that time would’ve been much better spent in Chiang Mai, but live and learn.

My departure from Phuket was consistent with my overall Patong experience…

On the van to the airport, the woman behind me puked all over the floor. Who, outside of grammar school does not know they’re about to be sick in time to get a bag? If worse came to worse, I’d puke in my purse! It splashed my legs, my dress and my shoes. It reeked, it was awesome, and it pretty much summed up my Patong experience.