Bangkok taxis are incredibly cheap. Like you can pretty much go across town for what it costs to sit in traffic for 2 minutes in NYC.

The downside to that is that pretty much anyone with a pulse can get a taxi license. Some of the drivers are super picky about which fares they decide to take, and some are averse (um, hostile) to using the meter where “falong” are concerned. One afternoon, it took 5 taxis before I found one to drive me out of Chinatown on the meter!

OK, so “lamonglass,” taxis… what does one have to do with the other? 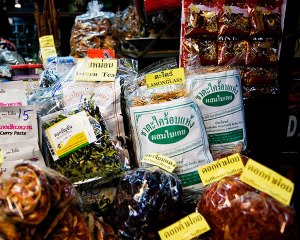 I thought it was a bit odd that one taxi driver after another had no clue where to find my high rise hotel. Then I began to notice that after showing them the hotel on a map, they’d say with sudden recognition, “ooooh, Lenaissance.”

So, I decided to cut to the chase and start asking to go to “Lenaissance Hotel” right off the bat. Talk about an “aha” moment, worked like a charm!

And that my friends is how “lamonglass” and taxis are related. In Bangkok, anyway :)