I’ve been drawn to Buddhism for awhile. I’m the same age as The Buddha when he gave up the throne to go find enlightenment, but I’ve got a chatty mind and perfectionist tendencies, so inner peace does not come easily.

I wanted to know more about the Dharma, so I talked with some monks in Chiang Mai and it turns out that there is hope for this fiery-tempered, half-Cuban, perfectionist-leaning Aries.

When I was growing up, I went with friends to the Methodist Church and the Baptist Church, both of which were different from each other and the Catholic Church I was used to. I briefly dated a Jewish guy in high school, which was pretty much the pinnacle of rebellion ;)

I remember asking my grandmother some religious questions and the answer pretty much boiled down to our way being “best.” I remember telling her that I thought it would make more sense to have a “religion buffet” where you could pick what suited you, but she said it didn’t work like that. And I wondered how she knew we were the “right” ones, and how God could be so judgmental.

In talking with the monks, I realized that Buddhism is the religious buffet I’d imagined back then! The Buddha encouraged people to adopt the lessons that resonated with them and forget the rest. There’s no guilt, no fear, just compassion and tolerance. 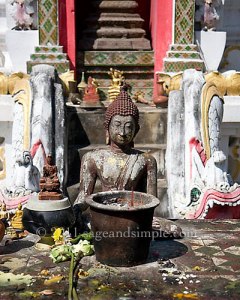 But the point of this post isn’t to teach or preach Buddhism. The point of all of this is to say that because of those monks, I’ve been kinder to myself. They had no idea they were talking to a fitness infomercial success story, someone who struggled all of her teens and the majority of her 20’s with her weight and was still fighting a daily battle with perfection.

As a young monk from Myanmar was explaining mindfulness, he told me to focus on the moment. He took exercise as an example. He said, “don’t think about the result, just think about the task at hand, the movement.” And I have. I’ve stopped obsessing over which program will give me the most muscle definition or the best abs. I take it one day at a time. I focus on each movement, I don’t think about all of the things I have to do when I’m finished working out. Each workout is like a coat of paint, the first one will be spotty, but eventually, subsequent coats will dry to an even and beautiful finish. If I’m having an off day, I go easy. If I miss a workout, I don’t punish myself. I don’t fall off the workout wagon and stop taking care of myself. I forgive myself and pick up where I left off.

Learning Danish is a similar scenario. I was taking my failure really hard. But then I told people how frustrated I was and how disappointed I was in myself that I couldn’t learn this language. And they’ve been helping me. And I’ve been helping myself. The wall near my desk is covered in post-its of Danish words and phrases. I practice them throughout the day, and I practice every night with Opie, who looks a little confused by my strange sounds, but my practice is deliberate and I try not to let my mind wander. If an unrelated thought comes, I acknowledge it, then let it go, and refocus on the spelling and the unusual sounds. There’s more than one way to skin a proverbial cat and those state-sponsored classes weren’t doing it for me. I’m actually starting to recognize words and phrases in conversations around me and it’s only been a week!

I feel like I’ve spent so much time lost in the forest, when if I’d just slowed down instead of freaking out, I could’ve found my way out much sooner. But I’m out now, and it’s good :)