I’ve never been a “that will do” sort of person, I need to love everything in and about my home.

Moving continents was a feat in and of itself. Trying to make a home in a place where I don’t know the shops, don’t have a car, and most places close early on weekdays, open for a few hours on Saturdays, and are closed on Sundays has proven to be an even bigger feat.

Last week, karma smiled at me and I was able to borrow a car. My evenings were a blur of trying to choose curtain rods, curtains, rugs, lamps, picture frames, plants, table linens, bed linens, a chandelier, return the stuff that didn’t quite work, and track down stuff that does. By Friday, I was exhausted.

As I was sleepwalking through Ikea (How Scandinavian!) with photos of my rooms and a detailed list of their deficiencies, my friend said to me, “relax, you will have a beautiful home but it takes time and effort.” Once upon a time, I’d known that, but somehow it had gotten lost in the suburban race for conformity and perfection, and it was spilling over into now.

I was 26 when I bought my first house. It was a beautiful house, more than most 26 year olds could dream of, but it wasn’t the house I wanted. In the beginning, I had pretty much the same philosophy as I do now… “love it, or wait for it.”

But being 26, I was easily bullied into doing and accepting things that didn’t make me happy. Slowly my house filled up with things I didn’t love. A sofa we bought in a hurry because we were hosting Thanksgiving, a couple of chairs because the living room was still “too empty”, a lamp here, some kitchen stuff there, and it never did feel like home to me. I love the beauty and aura of imperfect things and all the Pottery Barn stuff in the world wasn’t going to nurture that.

Now, I do have the house I wanted and I’m free to make it my own, in my time, free of judgment, disapproval, and snide comments. It’s not happening as quickly as I’d like, but as I look around, there’s nothing here that will just “do”. I buy what I love and slowly it’s coming together in a way that’s so pretty that I find myself just standing back and looking. It doesn’t take a lot of money to make a beautiful home. Like my friend says, it takes time and effort. Money helps, but you will see in upcoming posts that it doesn’t have to cost a fortune.

There are still a lot of loose ends, but I can show you my bathroom. I love this room. Seems kind of silly to say that about a bathroom, but I do love it! The only thing it’s missing is a clawfoot bathtub, but bathtubs in general are not in vogue here :( 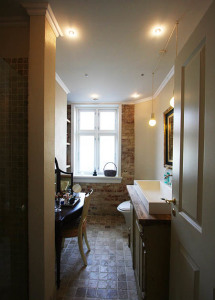 I begin and end my days at my dressing table. The chair was part of a vintage bedroom set I picked up at auction for $70. I found the Buddha at the Chiang Mai night market for less than $5 and I love that he’s one of the first things and last things I see everyday. The sink is set atop an antique cabinet and it was one of the things that made me certain that I had to have this place. And there’s tons of storage! The floor is heated, in the shower, too and it’s one of Opie’s favorite sleeping spots.

A few months ago, I had the opportunity to be on House Hunters International, but I decided to pass on my 15 minutes of fame. In 2002, I was featured as a success story on a fitness infomercial and I’ll never forget the loss of privacy I felt everytime I saw myself on TV. When the House Hunters opportunity came up, I seriously considered it, but in the end, it didn’t feel right to open up my home like that. But I do plan to share more of my space here, on my terms, soon.

A storm is coming, but I've got fairy lights, plan

Working outside with summer vibes ☀️🌻#summe

There has been a problem with your Instagram Feed.