I just got screwed by the plumber. Now, now, this isn’t that kind of blog, I meant it figuratively ;-)

I tried to replace my bathroom faucet myself. I bought the same model, hoping it would make things easier. It didn’t, and so I had to hire a plumber.

The plumber just left and when I went to admire my new faucet, I found this… 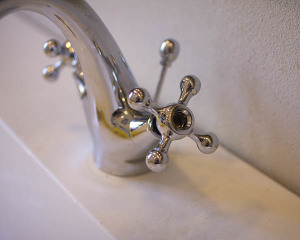 I don’t know if I want to punch something, yell at someone, or cry. I’m supposed to be finding inner peace, but obviously the Buddha never lived as an expat in Denmark!

I know for a fact the “cold” insert was there when I unpacked the faucet this morning. Coincidentally, the same piece on my old faucet was very worn, but the hot one was ok.

The reason I was replacing the other faucet was because it was leaking, which is probably an easy repair & flip opportunity for a plumber. Unless of course it’s got cosmetic issues, like a worn insert.

Now I’m not Nancy Drew, but if there wasn’t something shady going on, wouldn’t he have mentioned the obvious missing part? Of course it’s moot because I’m 100% certain that the piece was not missing when I handed it over for installation, and I can see from the “hot” side that it would’ve been pretty easy to pop it out with a screwdriver.

And he never bothered to ask whether or not I still wanted the old faucet. He just slinked out of my place with it under his arm. Even if he asked, I would’ve said “no” but it’s a bit odd that he just took it and ran.

Yet another mark in the “reasons to leave” column. I probably just spent $400 for a broken faucet. Awesome.

And there will be no Danish drivers license for me. I’ve overlooked a lot of crap in the past 17 months, but at a point, it becomes too much to make it worth my while, so I’m thinking long and hard about what I’ll do when my contract expires. In the meantime, I’m not investing anything more than is absolutely necessary to live and/or stay off anti-depressants.

This morning, I was working from home in my pretty living room, at my big antique dining table. Opie was sleeping in the sun and I was thinking how, even with disappointment of the driving situation and the impending winter, this isn’t a bad gig. But I’m deluding myself. This plumber situation is just one more example of the crap I put up with when I have to venture outside of my home and work bubble.

Happiest country on earth, my ass! Maybe for the Danes, but not for me.