If you’ve been reading my blog for awhile, you might recall the drama of me trying to get a Danish driver’s license.  I eventually gave up, but I’ve been without a car for two years, and it’s obvious that I need a car, or else I need to leave Denmark!

So, I jumped back into this hellish process, waiting six weeks for an appointment to get the all mighty “Doctor’s Certificate,” which is the key to getting this whole thing going—starting with a temporary Danish driver]s license.

The appointment went something like this: “Can you hear me? – Can you read the 3rd line from the bottom? – Can you push your arm against my hand? – Can you raise your foot?”

Anyway, I took today off from work to go to the Kommune.  I thought I had all of my ducks in a row, I was planning a quick in/out, leaving with a temporary Danish driver’s license scenario followed by a little shopping, but as I should’ve expected, it turned into quite an odyssey!

Everything was perfect, they didn’t even ask for a translation of my US license, a fight I was prepared to take. Everything was cool, until they noticed that you could *gasp* see my teeth in my license photo—apparently you aren’t allowed to show your teeth in the license photo!  And it was a lovely photo that my friend shot for me in pretty light, with a leopard print collar and flippy hair. *sigh*

So… I found a photo shop that makes license photos, but I’ve seen nicer mug shots. So, I went home and tried my luck with the tripod and a timer, ending up with something between the pretty flippy hair photo and the mug shot from the photo shop. I popped it onto a USB stick, pedaled back downtown to have it printed—and discovered my stick is formatted for Mac and their “system” only recognizes PC.  In 2012, seriously?

Back home to submit it online på dansk, back across town to the shop, where they couldn’t find the file. Finally, it turned up in the queue and soon, I was on my way back to the Kommune, with 45 minutes to spare before closing time.

There might’ve been a few tears and a lot of swearing (to myself and those closest to me, not the Kommune people or the photo guy) but, I’ve got a 2-month temporary Danish driver’s license!!!! 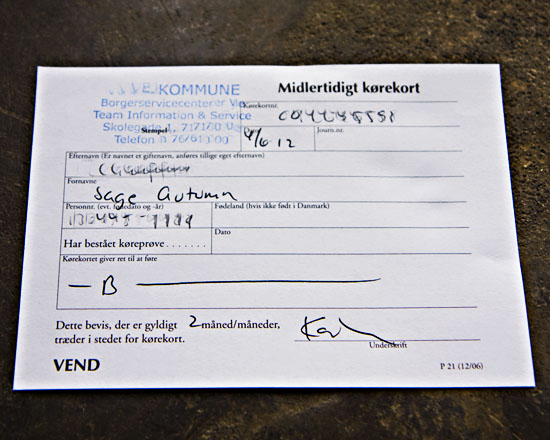 But do I dare buy a car? Given my track record here, it’s not out of the question that I’d buy a car, fail the test 5 times, then have to donate it to charity, and leave the country for mental health reasons.

But, hell! I cannot go another month without a car. I just can’t. It hurts my soul to even think about it :(

I know there are a number of expats reading this, so I want to point out a couple of things:

I know it seems impossible at times, but do your best to ask questions and do your own research because you can’t always trust people, even the people you’re paying to help you. If I’d just taken his word, I’d be out 1200 kr. unnecessarily, and I wouldn’t have a temporary Danish driver’s license.