Two of my lifelong friends are hearing HH the Dalai Lama speak this week in our home state of Connecticut.  It seems wrong to be jealous of anything having to do with the Dalai Lama, but yes, I’m just a wee bit jealous :)

All of this thinking of the Dalai Lami has brought me back to my trip to Thailand and the photos I took of the temples, and the lovely morning I spent talking with a monk in Chiang Mai. 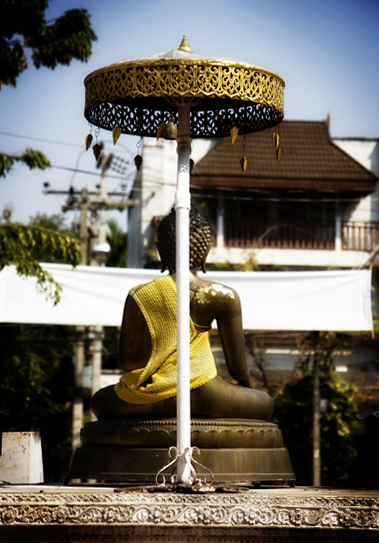 Wat Chediluang Varaviharn, Chiang Mai
I need to go back to Southeast Asia.  But next month, I’m off to Kraków.  You’re probably thinking “who takes a November holiday in Poland???”  Well, I’ve never been one for convention ;-)
I’ve been to Rome, Venice, Amsterdam, Berlin, London, etc., but those are the places easily (and often) visited from the US on a 10 day trip to Europe.  It’s time to venture into Central Europe.  I could go to Prague, but why not go to Kraków?
Kraków apparently has a big jazz scene.  Who knew? Secondhand shopping is apparently not very plentiful, but there’s a flea market that I’m definitely going to check out in hopes of upstaging the photographer’s stunning vintage Bier Beirette score.
I’m planning a day at Auschwitz-Birkenau, which I expect to be a life changer.
Other than that, I look forward to wandering, seeing, sitting in cafés, making photos… this time with a companion :)