For the most part, I’m not into fake meat, but when I lived in the US,  I’d once in a while buy a box of frozen veggie buffalo tenders from Trader Joe’s.  I’d eat them on a sub roll with iceberg lettuce and a whole bunch of bleu cheese dressing!

I miss those sandwiches almost as much as I miss Taco Bell and Gardenburger Riblets.  There’s not much in the way of fake meat here.  One store sporadically sells Quorn, but other than that, I’m left to my own devices.

The other week, I could not stop thinking about those veggie buffalo wings.  It was not going away.  This was an issue on a couple of levels:

Necessity was again the mother of invention, and my homemade tempeh buffalo wings were born… 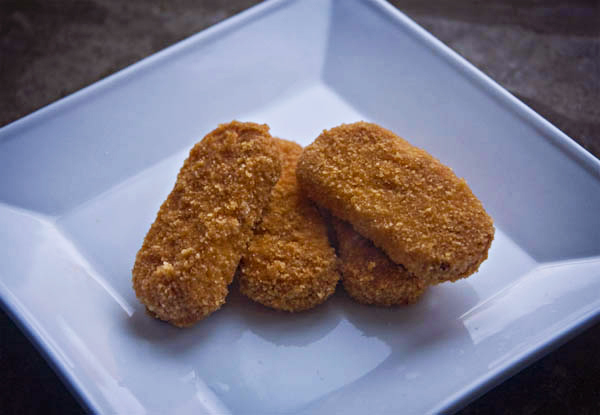 The sauce is a riff on various hot sauce and buffalo wing sauce recipes from around the internet, adapted to what I had on hand.  It makes enough for about 3 batches of 4 “wings”.

Bring the vinegar, garlic, cayenne pepper, butter, ketchup, and 1/8 t salt to a simmer, then puree it so that the cayenne and garlic becomes one with the liquid ingredients. Set it aside.
Cut the tempeh into 1-inch thick slices and boil it for 15 minutes. Drain it, and let it cool.
In the meantime, mix together the flour, garlic powder, paprika, 1/4 t salt and some black pepper; pour a bit of milk into a bowl; pour some bread crumbs into a third bowl. These will not reheat well, so I only do 4 pieces at a time. If you’re going for the whole tempeh block, then I suggest doubling the flour mixture.
Dip the tempeh slices into the milk, then the flour, then the milk, then the bread crumbs.  Don’t be shy, coat the heck out of them!  Then lay them onto a greased baking sheet.
Brush them lightly with oil and bake them at 400 degrees (200 Celsius)  for 20 minutes or so, flipping halfway through and rebrushing with oil, until they’re looking crispy. Dip them in the hot sauce and serve them with bleu cheese dressing. 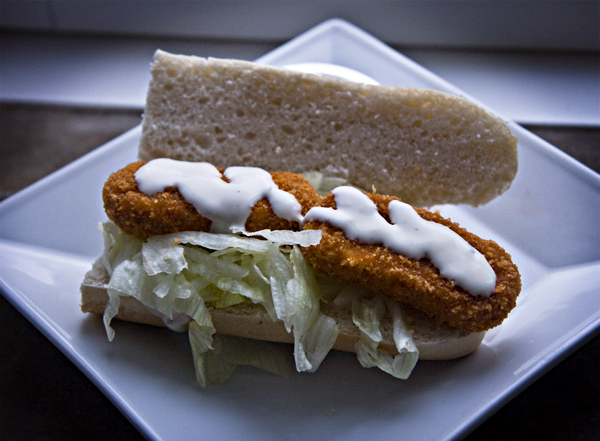 Or stick them in a baguette with iceberg & bleu cheese for a buffalo tempeh sandwich :)