We visited Auschwitz on a misty late autumn day.  I was hoping that by going late in the season, we’d avoid hoards of tourists, but no such luck!  The arrival process was pretty chaotic, which in retrospect was pretty symbolic.  Really, though, they should invest in some entrance signs because we had no idea how to join a tour, how to get into the camp, or how to catch the shuttlebus to Birkenau.

I was conflicted on whether or not to join a tour group, but after seeing them being herded from building to building, I bought a guidebook from the gift shop and went it alone.  I’m still not sure it was the right choice, but I don’t have a strong feeling it was the wrong choice.

Auschwitz is the most historically significant place I’ve visited.  I was afraid to go because there’s no way to unsee it.  Once you see it, you’ve seen it and there’s no going back.  It’s one thing to watch Schindler’s List,  Boy in the Striped Pajamas, and Elie Wiesel on Oprah.  It’s quite another to actually be there, to see the empty Zyclon B cans, the 2 tons of human hair stacked to the ceiling, the death block, the gas chamber, the crematorium, and so many other things. 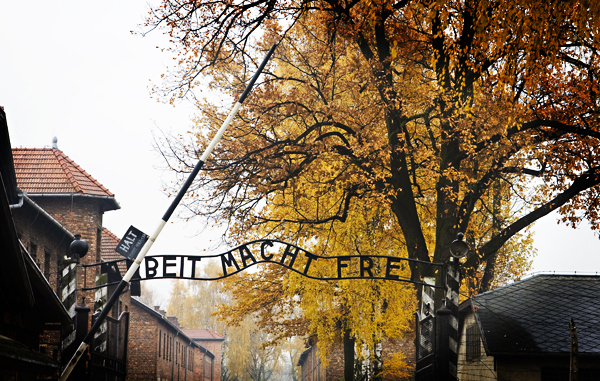 There’s so much to say about this place, but so much has already been written.  My first impression of Auschwitz I was of how well it was built.  Against the changing colors of the late autumn leaves, it was quietly poetic.  I expected wooden shacks, but instead there were tree lined streets, and neat brick buildings which were former Polish army barracks.  The wooden shacks and most of the horrors we’ve heard about are at Birkenau.

Most of the buildings have been converted to museum exhibits.  I went through all of them, and the things that have stuck with me most were:

I’ve heard a lot about Auschwitz being haunted, but there were only two times where I felt a chill.  The first was when I went into an old barracks to use the ladies.  I was the only one in the building, it was cold and silent, and probably more of me thinking too much than a presence, but who knows?  The second time was in the courtyard outside Block 11, near the Wall of Death where thousands of prisoners were shot.  But again, I’d just toured the “Death Block” and was standing in a silent courtyard looking at a wall where thousands of people were murdered on false charges.  It would be hard not to feel a chill there.

I stood in the gas chamber.   It was a small one used to test Zyclon B before they started using in en masse at Birkinau. It was sort of like an underground bunker and definitely not the sort of place you want to see in your last moments in this world.

We spent over 4 hours going through the exhibits, and when we went to catch the last shuttle bus to Birkenau, we discovered there wasn’t another bus back to Auschwitz I until noon the next day.  This would’ve been good information to have up front; it seems a bit odd to shuttle people out there but not bring them back.  Since the only bus back to Krakow was from Auschwitz I, and Birkenau was a few kilometers walk, we took the standing room only bus back to Krakow, without seeing Birkenau.

On our way to the bus, we met a group of Swedes who told us they had wrong information about the closing time of the camp and had taken the 2 hour bus ride from Krakow only to be turned away at the gate.  That’s so much worse than just missing Birkenau!

I’m not disappointed that we spent so much time in the Auschwitz I exhibits that I didn’t see Birkenau.  We spent the right amount of time there, but the experience is somehow unfinished.  So, in January, we’re traveling back to Krakow for 2 days, mostly to see Birkenau.