I’m so happy I deviated from the Grand Tour cities to travel to Krakow, a small, ancient, immaculate city, made even more lovely by its kind people.

There were a lot of tourists, though fewer Americans that I’ve observed in Rome, Amsterdam, London, etc.  I think Krakow is a bit underrated, in the way I’ve heard Prague is overrated (hopefully I’ll soon judge for myself). It’s definitely not as evolved as other cities in handling tourists, but my experience with the city didn’t suffer at all.

For Europe, Krakow is almost unbelievably affordable.  An entree in an upscale restaurant was around 60 zloty (approx. $16/ 90 kr) on the high end.  A 2 hour mani/pedi at a day spa only ran me 210 zloty (approx. $65/ 375 kr).  There’s also a lot of reasonably priced shopping, mostly European chain stores, but some nice independent shops, too.  The secondhand shopping was nothing to write home about, but then again, Poland isn’t exactly a wealthy country.

I don’t recommend Krakow to people who want everything just so.  Polish is the main language here, some people speak English, some speak very basic English, some do not.  Cracow is a major city for Poland, but it’s not a major city for the world, like London or Rome.  The signage is pretty poor, so you really have to know what you’re looking for and in which general direction, and some of the menus are only in Polish.  But the people are friendly, kind, and really do their best to help you.

There was a really sweet old guy at the Central Station (Dworzec Główny) who was there when we arrived, when we needed to find a bus to Auschwitz, and when we left.  Each time, he asked where we were heading, then walked us to the appropriate bus, tram or train, helped us buy our tickets, and saw that we got on ok.  Well, with the exception of the tram to our hostel, which we rode illegally for 2 stops because we couldn’t figure out the onboard ticket machine (sorry, Krakow).  He provided a very helpful and friendly service, so we were happy to throw him a few zloty for his assistance each time.

We stayed in a beautiful classically decorated apartment in a 14th century building, overlooking the Main Market Square (Rynek Główny) in Old Town.

The more I travel, the less I enjoy staying in hotels and the more I prefer staying in apartments, which are not only less expensive, but are often in better locations than hotels, and a lot bigger than hotel rooms. 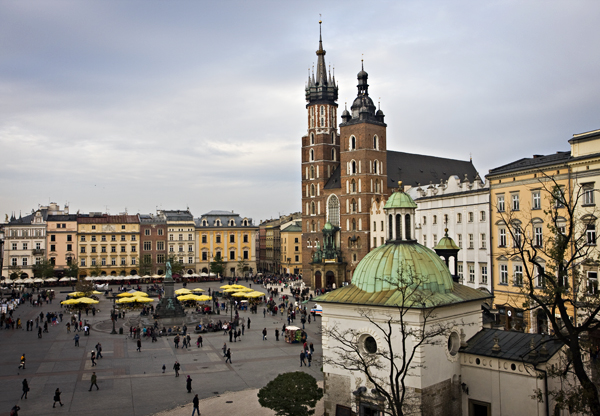 What an amazing view we had!  The first afternoon, a classical musician performed in the square.  It was lovely to look out on the old square from our 4th floor window, drinking coffee, listening to the beautiful music, and the hourly bugle call and bells of St. Mary’s (Kościół Mariacki).  It’s definitely one of my favorite travel memories to date.

Each morning, they brought a breakfast tray to our room.  A view like that, classical music, breakfast in bed… what’s not to love?

Traveling as a vegetarian is trickier in some places than in others.  Being a vegetarian in Krakow can be tricky.  Polish food is very meaty, and the stuff that isn’t meaty is mostly starchy and white.  Most of the food in Krakow is Polish (of course!).  I ate a fair amount of potato, cheese, and onion pierogis, which I was beyond sick of at the time, but that I can’t stop craving as I write this :)

There were some Italian places, a couple of Mexican places, and plenty of kebab places.  I had 2 falafel rolls in Krakow (big surprise, right?) both of them were microwaved and definitely belonged in the Falafel Hall of Shame for texture, lack of flavor, and poor choice of wrap material.  I get that falafel isn’t Polish and I might seem like a jerk for being so hard on Krakow’s falafel, but I see falafel as a global savior of vegetarian travelers;  a worldwide food with the potential to be delicious anywhere. But really, even bad falafel is usually pretty ok.  So I’m not saying it was inedible, it just wasn’t up to par with the falafel I’ve had in say, Amsterdam or Berlin.  I should start a falafel index…

One of my favorite things to eat in Krakow was zapiekanki, which are a street food variation of french bread pizza.  Serious french bread pizza, like at least 12″ of french bread pizza for around 7 zloty (about $2/13 kr).  You can choose from a variety of sauces and toppings, I went with tomatoes, cucumber, olives, feta, and garlic sauce, and I’m sorry I didn’t get to try double cheese with barbeque, but I was in dire need of colorful food, so I did what I had to do.

In closing, let me share how karma paid me back for that stolen tram ride…

Somehow, I managed to bring two of the same boarding pass, instead of one of each of my boarding passes.  I didn’t realize this until the morning we were flying home. When I went to reprint my boarding pass, I wasn’t able to because it was less 4 hours until flying time.  Mind you, I’d already checked in online in due time, and I wasn’t asking the airline to print the pass for me, I was just trying to reprint it.

Long story short, I ended up paying 285 zloty (approx. $87/ 510 kr) in “stupid tax” for the crooks at RyanAir to reprint my boarding pass.  There’s a special place in hell for RyanAir, and its predatory policies.  Had I asked them to print the boarding pass, the charge still would’ve been extortion, but really my own fault.  Cutting off my ability to print the boarding pass myself before leaving for the airport is just shameful.

But that’s ok, I’m going back to Krakow in January (more on that later).  I booked their cheapest ticket (275 kr/ $50) and there’s not a snowball’s chance in hell that I’m paying to check a bag (or for anything else).  If there are issues with the weight of my bag, I’ll waddle onto that plane wearing so many layers I’ll look like Randy from A Christmas Story. I’d rather die of thirst than buy a drink.  Come to think of it, RyanAir actually owes me 2 Euros change from a drink I bought coming back from Venice!!!  See?  Crooks!