I’ll get to the coat, but first, I have literally been in bed since last Thursday.  The flu hit me like a ton of bricks Wednesday night, then it was fever, chills, sore throat, stuffy nose, cough, headache until yesterday.  Then the fever broke and today I can finally get up and sit at the computer a bit, though the headache, the hacking cough, and the zero energy situation are still lingering.

I can’t remember being this sick in my adult life.  It hurt my teeth to open my eyes…  no reading, no internet, no watching films, just lying in bed with Opie, shivering, sweating, trying not to freak out about being locked in, alone in a foreign country.  I somehow managed to get up once a day to refill my water pitcher and give Opie some food, but it was a major task.  At one point, I tried to make some ginger tea, but I had to abort the mission before the water had finished boiling.

And my upstairs neighbor is a nice guy, but he’s about as sharp as a marble.  He’s been renovating since August.  In that time, he has cut my power more than once, made a habit of forgetting to turn off the basement light which shines into my bedroom and is on our shared bill, made a pig sty of the yard and common areas, scraped the hallway wall, trashed my bike by throwing debris out of his window,  killed a piece of the lawn by leaving a pallet in place for too long, and done something to make his dirty bath water run down my kitchen wall, grossing me out, staining my counter top, and ruining a couple of cookbooks.  But the worst part is that he lacks whatever social skill would cause him to stop and think that maybe power tools and hammering after midnight and again at 6:45 am might not be appropriate in a shared building.

I spoke to him about this awhile ago and it stopped, but it started again last Wednesday.  So in addition to all of my flu misery, I was also listening to drilling, hammering, sawing, etc. from 7 am onward (he’s actually at it right now), but my favorite part was when they cut the heat to my apartment and started banging on the heating system!  And he left the basement light on for two days!!!  He’s lucky I was too sick to get out of bed!

This morning, I noticed a board with nails sticking up in the driveway!  I’m sort of hoping he drives over it and learns a valuable lesson about the importance of  cleaning up after himself.  I know that’s creating bad karma, but I’m really struggling to take the high road here.  I mostly take it easy on him, mainly because if I’m going to give him a proper tongue-lashing, I think it should be in his native language, and I’m not up for that.  As it is, he’s always looking at my shoes and trying to peek into my apartment and grocery bags, so it’s probably good to not come across as too much of a crazy American by adding a “bad temper” to my rap sheet of pink and purple rooms, swirly patterned floors, weird music, a red bike, the leopard print coat, crazy shoe collection, etc., etc.  Danes tend to be a bit more reserved than those of us who have come from across the Atlantic.

In the US, I went years and years without getting sick.  Here in Denmark?  I’ve already been sick twice this winter.  Americans may get a bad rap for being germaphobes, but my lifestyle here is much healthier than it was in the US, yet I’m sick more often.  Maybe there’s something to be said for all of that hand sanitizing gel?

Anyway, now that the flu is out of the way, and I’ve achieved a quick fix to my holiday weight gain (at least the flu was good for something), I’m thinking of spring, and I found this lightweight coat for a steal at a secondhand shop a few weeks ago… 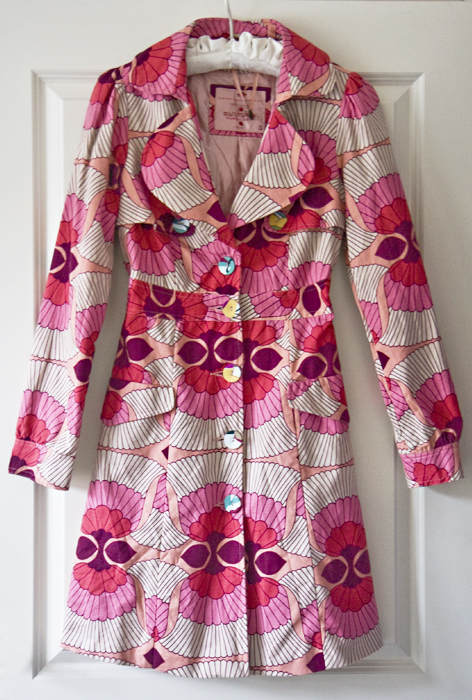 It’s going to be perfect with jeans, a black turtleneck, and round-toe black pumps for strolling the cobblestone streets of whichever fabulous city I choose for this year’s birthday excursion :)

Where in the world will 38 find me?