Before I left, I couldn’t understand peoples’ indifference towards Paris, probably just as much as they couldn’t understand my naive excitement.  “Paris is nice.”  “Paris is… French.”  “Have you been to Barcelona?” “You’ve been to Italy, I think you’ll be disappointed.”  “What is it with Americans and Paris?”

And they were right.  Paris is nice, it’s French, it’s no big deal, and I was disappointed.  It’s like every other major city in the world… it’s big, dirty, expensive, with plenty of McDonalds and Starbucks, Banana Republic, the familiar stench of frat boy cologne wafting out of Abercrombie & Fitch, a generous offering of museums, restaurants, and boutiques, and a handful of things that make it unique.

Globalization has made it so that pain au chocolat and Camambert are just as available and delicious in New York, Bangkok, and everywhere in between as they are in Paris, and everything else can be ordered online.  It’s almost like I’d been to Paris, before I’d been to Paris. 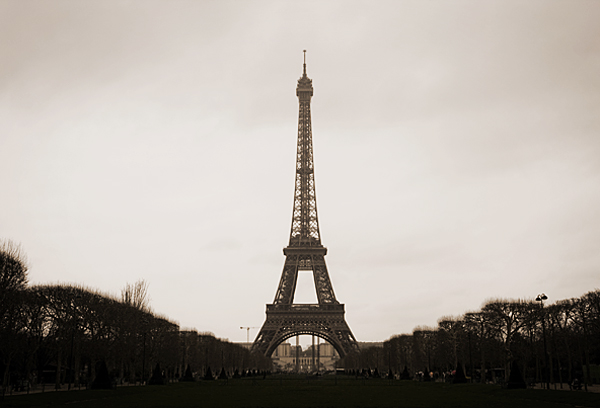 Also?  Christian Louboutin shoes are made in Italy!

I decided that my consolation prize should be a pair of Chanel sunglasses.  Unfortunately, Chanel’s security seemed like a hilarious satire… big refrigerator sized guys with ear pieces were overseeing everything, they looked like Secret Service.  I must’ve come across as some sort of sticky fingered menace because I was assigned my very own security guy!  He stood a couple of meters away, watching me like a hawk as I tried on sunglasses, which by the way, were covered in fingerprints and sell online for 100€ less than in that fancy pants Saint-Honoré boutique. (They’re being delivered on Monday, and will probably have fewer fingerprints, too!)

In Paris’ defense however, it was cold and rained every day.  Had the trees been budding, the sun been shining, and had I been able to stroll along the Seine, have my portrait drawn, have a picnic, take the less obvious photos, and do anything other than huddle under an umbrella or a crowded café canopy, I might’ve loved Paris.

Or maybe if I didn’t already live in Europe, Paris would’ve had a dramatic culture shock effect that would’ve kept me longing to go back for years.   Maybe traveling is like heroin and the more you do it, the bigger hit you need to achieve the same high ; -)

There’s a lot to cover… my booking.com fiasco, the walkout at the Louvre, Clignancourt, Sacré Cour, Père Lachaise, and various random photos and experiences. I’ll take those one by one…