Lest you think I’m some sort of fence jumping, rock god worshiping, wine swilling, designer shoe chasing heathen, I’d like to tell you about my trip to the Louvre :)

Like pretty much everything else in Paris, it didn’t go according to plan.  We were supposed to have a day at the Louvre, but as luck would have it, that was the day the Museum was forced to close due to an employee walk out to protest pickpocketing.  The Photographer and I were two of the “disappointed tourists” referenced in this article.

So, instead, we ended up with a few rushed hours at the Louvre a few days later.

We spent most of our time in the Italian Paintings exhibit because you can’t go to the Louvre without seeing the Mona Lisa and there was so much to see on the way in and out that we lost track of time.

I’d always imagined the Mona Lisa to be of average size but then I kept hearing how “small” she was, so in my mind’s eye, she had shrunk from average size of about 16″ x 24″ to something about half that size.  In reality, she’s closer to my original impression, but I guess compared to the huge canvases of say, Botticelli, she is relatively small.

It was cool to see the Mona Lisa in person, but the experience was pretty overrated.  Due to her history with attempted vandalism, she’s behind glass, and the crowds are kept several meters away from her.  This made it difficult to experience her in the same way as the other less famous, but no less spectacular paintings.  It can bring tears to my eyes to stand within touching distance, admiring the brushstrokes, shadows, highlights, and colors of an unprotected and several hundred year old painting.  Am I the only one who gets teary in art museums? 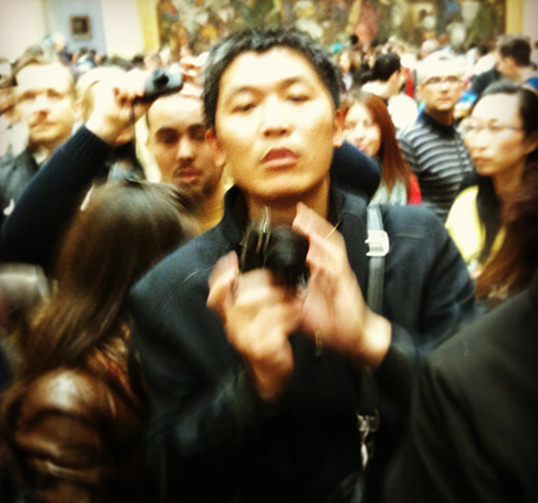 Somewhere, there’s a 12 year old (or so) boy who will never think of the Mona Lisa again without thinking of me.  Something about crowds makes people forget their manners.  I waited my turn and when I finally got to the front of the crowd, I just wanted to look at her, but this little creep started pushing me, then before I knew it, he was reaching over my shoulder, and holding his camera in front of my face.  So I grabbed his impolite little wrist and told him that looking at fine art means using his manners and that he would need to wait his turn.  He looked like he saw a ghost, then scurried off, I assume without getting his photo.  I have no remorse.

My favorite work of all was the Venus de Milo.  I’ve always loved her, but wanted to see her in person even more after falling in love with the spectacular sculptures in Rome.  I know she’s Greek, but Rome was my first up close and personal experience with such old and amazing stonework.  I’ll never forget my first glimpse of the fountains in Piazza Navona. 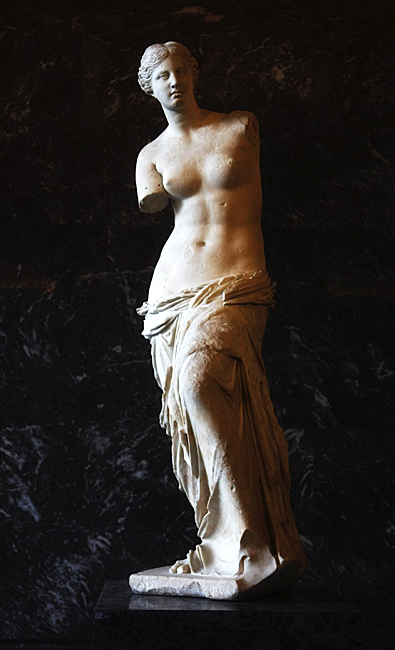 Look at those abs! I wonder what her arms looked like.
She’s my new fitness role model ;-)

I’d love to spend more time at the Louvre at some point,  I’d also like to see the Impressionist works at d’Orsay, but right now, I’m dreaming of going back to Rome. I never did get to see the Sistine Chapel.