I don’t write much about Danish food.  Danes love their meat, so as a vegetarian, most Danish food is off limits to me.  The majority of restaurants around here don’t even have a token veggie dish on the menu.  Here, a “veggie burger” is typically a burger with all of the fixins, minus the burger, and with the same $20 (give or take) price tag.

But, there are a handful a Danish specialties that I’ve fully embraced, like rugbrød.  Another one is koldskål (pronounced something like cul-skol).   I’m not really sure if it’s a snack, a dessert, or what.  I’ve yet to get a straight answer about that, but I pretty much eat it whenever I’m in the mood…  breakfast, lunch, dinner, snack, dessert.  Really, anytime on any warm day is a good time for koldskål :)

Now what the heck is it?  It’s a Danish buttermilk dessert, a mix of buttermilk, tykmælk, egg yolks, sugar, vanilla, and lemon, and it’s served with kammerjunkere (pronounced something like kamma-youn-ga), which are little vanilla/butter cookies.  It’s like an upscale version of Cookie Crisp ;-) 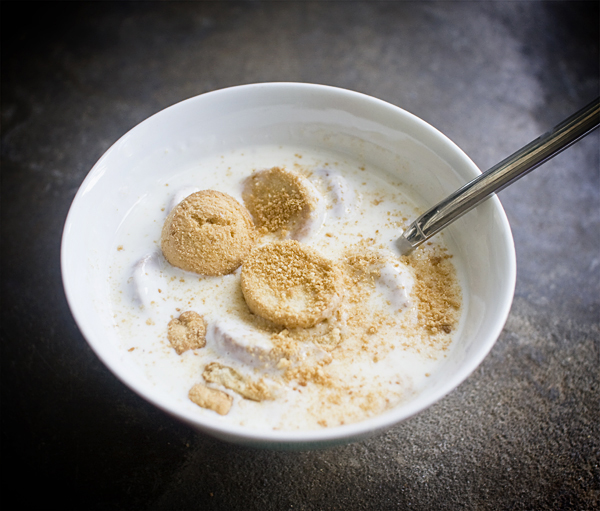 Danish dairy products still confuse me to a point, but I know we don’t have tykmælk in the US.  The closest thing would probably be plain yogurt.

I’ve never actually made my own koldskål, because in the summer, every grocery store sells it pre-made for a reasonable price (about 12 kr. or $2 per litre), and I don’t think making it myself would improve it.  However, on particularly warm days, it can be impossible to find the premade koldskål late in the day because it sells out so quickly.  But I’ve learned from my rookie mistakes, and once June arrives, I pretty much always have a carton in my fridge.

There’s even a Danish pop song about it :)

When I leave Denmark, I’ll definitely take the summer koldskål tradition with me.   I’d probably use this recipe as a starting point because it has a workaround for the missing tykmælk, and I’d start with the juice of 1 lemon.  The koldskål I’m used to definitely has a hint of lemon.

And I’ll probably bring a stash of kammerjunkere back with me, but I wouldn’t hesitate to give this recipe a shot, or else I’d substitute crushed Nilla wafers and just forget about the kammerjunkere :)