Time has been flying by and all of a sudden it was time to go to Stockholm, for my first official event as Robert’s other half :)

What a great week!  I saw Robert rock his presentation, I got to see others quoting his work, and I even got to see him autograph a copy of his book :)

We took a dinner cruise in the Archipelago, and were invited to cocktail reception at Stockholm’s City Hall, where we had lovely food and wine before being given a tour the rooms where the Nobel Awards Banquets are held! 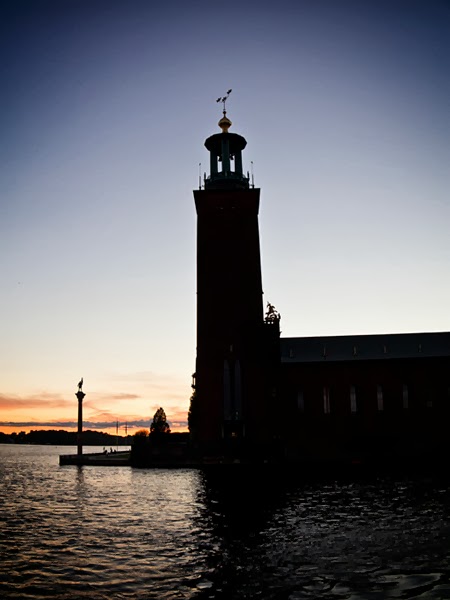 Stockholm’s City Hall looks very old, but it was actually opened in 1923, and was built to look old… mission accomplished.

Despite all of this fanciness, the week was not entirely proper.  On Friday afternoon, Robert convinced me to join him for a coffee on the roof of Stockholm University.  I mentioned that we might want to make sure that the door wasn’t going to lock behind us, but Robert disagreed.

Long story short, 40 or so minutes later, I was saying “told you so,” and the conference delegates inside were wanting to ask Robert a question.  Upon the discovery of his conspicuous absence, we were finally rescued, and Robert’s shenanigans were divulged to the group ;-)

If this is how my life is going to be from now on, I think I’m pretty lucky lady who’s in for a heck of an adventure!