Burying a St. Joseph Statue to Sell a House

I’d never heard of burying a St. Joseph statue to sell a house before, but it’s apparently a well-known practice.  So well-known in fact, that you can by a St. Joseph home selling kit off of Amazon! 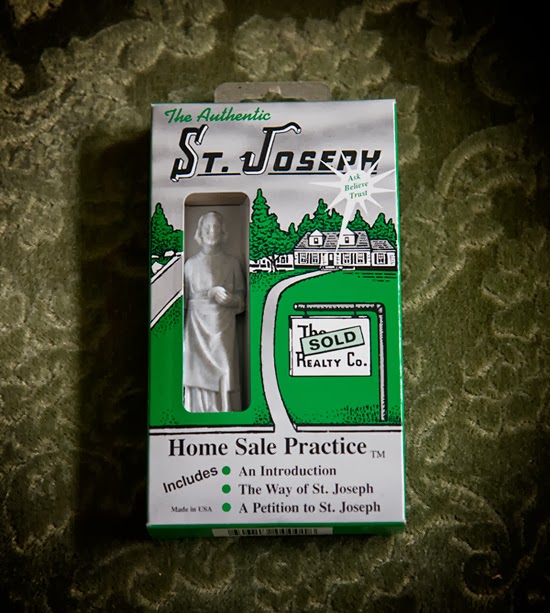 St. Joseph is now buried upside down in the pot of my favorite (and Opie-chewed) spider plant in the front window, next to the “Til Salg” sign!

If you’ve been reading my blog for awhile, you might know that I was raised Catholic, but now consider myself a Buddhist-leaning agnostic. You might wonder how I reconcile asking a Saint for help.

Well, I don’t see it as asking a Saint for help as much as I see it as invoking the law of positive attraction. I’ve gotten almost everything I’ve ever wanted in life, and I mostly attribute it to being a big time daydreamer. I believe that daydreaming helps to manifest the things I want, or at least leads me to make the decisions that lead me to the things I want ;-)

Burying a St. Joseph statue to sell a house is another way to help me focus on the outcome I want, which is a quick sale at my asking price.

The real estate photographer was here today and after a quick look around, he said that he shoots over 1,000 properties a year and that mine is one of the coziest, most inviting properties he’s seen and that he was, “from a personal perspective,” looking forward to photographing it.  Creating this home has been a labor of love, and that was one of the best compliments anyone could’ve given me :)

Let’s hope that a combination of the universe and using a St. Joseph statue to sell a house bring me a potential buyer who agrees…

Update: I can fully recommend burying a St. Joseph statue to sell a house. After a little over six months in a slow market, I was able to unload my apartment, on my own, without a realtor. Read about it here.