I’d intended to post this cinnamon ice cream recipe last week, but I got wacked with the flu and almost missed Thanksgiving, so blogging was the last thing on my mind.

I love this homemade cinnamon ice cream with autumn desserts like apple cobbler and apple pie! 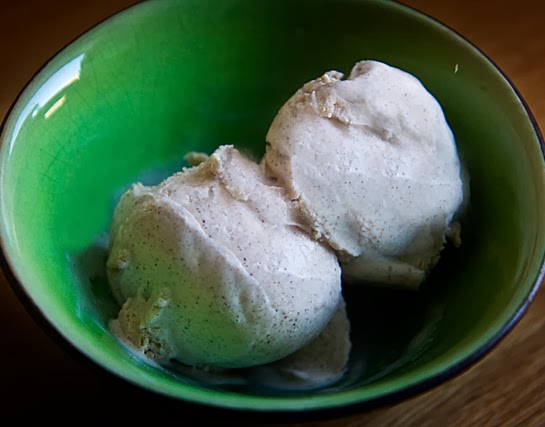 3/4 cup sugar
1 1/2 cups coffee cream*
2 eggs
1 cup heavy cream
1 t vanilla
2 1/4 t ground cinnamon
Whisk together the sugar and coffee cream over medium-low heat, and slowly bring it to a simmer.  As it starts to simmer, remove it from the heat.
Use an electric mixer to lightly beat the eggs in a large bowl, then beat half of the cream mixture into eggs.  You need to be quick here, or you risk cooking the eggs, which would be gross ;-)
Add the mixture back to the pot and whisk in the heavy cream.  Continue to cook it over medium-low heat, stirring with a metal spoon until it thickens enough to coat the back of the spoon.
Remove it from the heat, whisk in the vanilla and the cinnamon, and let it cool, then process it in your ice cream maker for 45 minutes to an hour.

*This is half-and-half in the States… you’re looking for something with around 10% fat.