I started the new year with a short holiday in the Eternal City!

It was a far cry from my last visit when I stayed in a hellhole near Termini Station, which was most definitely not one of the most romantic hotels in Rome. The area around Termini Station is an area you pass through, not a place you want to stay! In my defense, I stayed there on a recommendation of a fellow expat, but have since learned to do my own research ;-)

Hotel San Anselmo is a converted villa, high atop the Aventine Hill in a quiet neighborhood well removed from the tourist traffic, but still just a short walk from Circus Maximus and the Colosseum.

I was welcomed to afternoon tea, then shown to my room, which overlooked a mandarin tree—and had a lovely soaking tub! 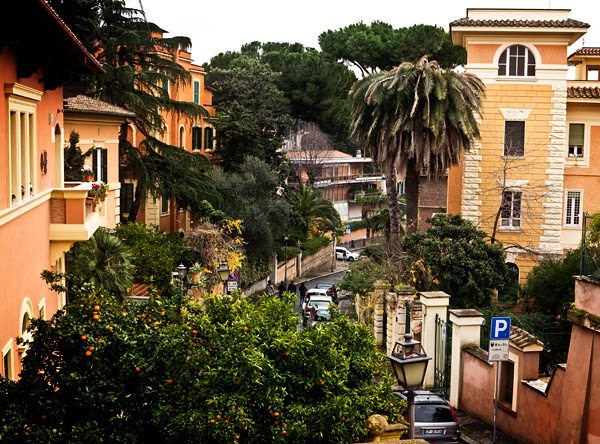 Each evening, I walked along the hyacinth-scented streets to a delicatessen at the bottom of the Hill where I bought bread, pesto, olives, cheese, and wine for my nightly picnics. So much more fun than going to a restaurant!

This trip could not have been more perfect! So if you’re looking for one of the most romantic hotels in Rome, I can confidently point you in the direction of Hotel San Anselmo for its location, romantic setting, and attentiveness of the service.

I revisited the touristy stuff like the Colosseum, Palatine, Trevi Fountain, Piazza Navona, Spanish Steps, St. Peter’s Basilica, etc. But I also spent a fair amount of time shopping and getting lost. More on that in my next post :)