When in Rome (or anywhere outside of Denmark), shopping is high on my list of priorities. I tend to splash out on handbags and shoes, while spending more conservatively on clothing which only lasts a few seasons, so I researched ahead of time where to shop in Rome on a budget.

Where to Shop in Rome on a Budget

If you want great, stylish Italian clothes without breaking the bank, you need to know where to shop in Rome on a budget. It pays to research ahead of time because there are a lot of shops aimed at tourists, which sell “Made in Italy” clothing of abysmal quality.

I started my shopping trip on Via Cola di Rienzo, which is where the locals shop.  There were some recognizable chains, but mostly small shops selling Italian-styled clothes. So many pretty things I would’ve liked to have bought, but all were incompatible with the Scandinavian climate!

I browsed the length of Via Cola di Rienzo to Piazza del Popolo, then nipped down Via del Corso, which is one of the main tourist shopping streets. There were far too many familiar shops and far too many people in this street, so I turned off into the oddly enough, less crowded tourist track which took me through Piazza Navona. 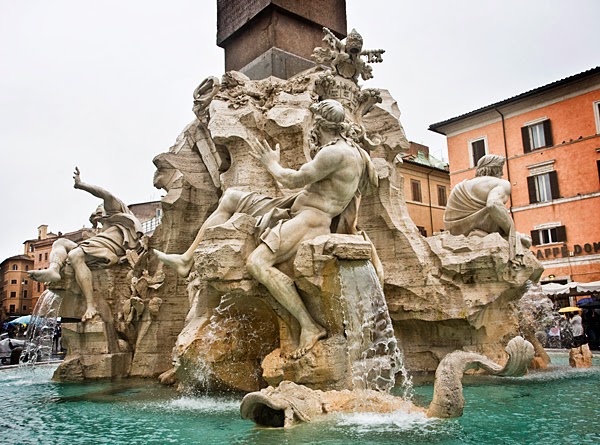 Piazza Navona was one of my favorite sights last time I was in Rome and I was looking forward to seeing it again—unfortunately, there was a Christmas Market still going on, so it was very crowded and difficult to appreciate, but I think its fountains and sculptures are the most beautiful in Rome. If I’m ever filthy rich, an apartment overlooking this Piazza is high on my wish list ;-)

From there, I just wandered the back streets of Rome, hitting the Pantheon, and Trevi Fountain, until I needed a caffeine fix, and I started looking for a café. I hate being ripped off even more than the average person, so I’d rather collapse from hunger or thirst than be swindled in a tourist trap! It took me awhile to find a café I approved of.

By happy accident, I found a lovely and tiny café on Via dell’Orso, which had coffee and table service for the unheard of price of €1.50! It had three outdoor tables, owners who didn’t speak English, and a local clientele… perfect! One coffee turned into two, which turned into a light meal, all for around just €7!  I’ve marked it on my map, and I’ll be back :)

Heading back to the hotel, I passed a shop on Via Arenula that had my name written all over the display window. I came out with a dress and two coats, which had also been discounted 30%… all in all, a great shopping day!

Longtime readers of my blog might remember me having to pay 285 zloty for a RyanAir boarding pass in Krakow. I found myself in a similar predicament in Rome. I definitely put my boarding pass into my handbag, but I somehow managed to lose it between checking out at the hotel reception and checking in at the airport. In my defense, I had a 7 am flight and Louis (Vuitton) was probably none too thrilled about having to fly RyanAir ;-)

After waiting in line to get the naughty slip that needed to be brought to another desk where I’d be fleeced for a reprint of my boarding pass, I got the bright idea that perhaps someone at one of the currency exchange desks might be willing to help me out for a few Euros. Luckily, the Krakow incident taught me to always keep PDFs of my boarding passes on my phone, and I was able to email the files to my good samaritan who not only printed it out, but who wouldn’t accept anything in return.  I know karma will repay her :)