Robert has been “suggesting” that I post a photo of his beloved orchid.  He says, “you’ve complained about the bloody thing so much, you have to show your readers that it’s a lovely orchid.”

So here is Robert’s prized orchid, along with my grandfather’s Buddha statue, which he acquired for some reason in NYC’s Chinatown in the ’50s for $2.95… 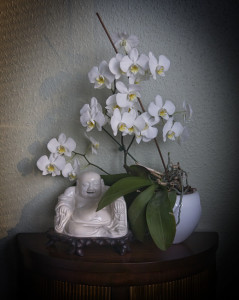 The orchid is in its third bloom in 18 months and currently has 31 flowers :)
P.S. Now he’s expecting all of you to comment on what a beautiful orchid it is ;-)
P.P.S. I’m slowly introducing color into his very white and modern world, starting with this sage green in the bedroom :)