I’m finally finding my “kitchen legs” again.  I joke that Robert’s kitchen “was built by people who hate to cook for people who hate to cook.”  Its poor layout, and lack of counter and storage space are really not meant for someone who loves cooking as much as I do.  But we live in the city center where space it at a premium, so that’s how it is, and I’m slowly getting back into cooking, even if it does feel like I spend more time climbing up and down a step ladder to gather everything I need, than I do in front of the stove!

I’m also having to get used to cooking for a 13 year old boy.  I don’t know the first thing about 13 year olds and I definitely don’t know what to feed 13 year old Europeans.  But I’m figuring it out, and The Oik is a good sport about it.

One thing I love about living where I do now is that I have much better access to “exotic” ingredients, so I’m finally able to revisit recipes I’d abandoned since moving here.   I’ve got four Asian markets within walking distance, which is fortunate since American style Chinese takeaway has not found its way to Denmark.

I love hot & sour soup, but even in the US, it often had pork in it, so I had to make my own.  Now with such easy access to so many Asian markets, I’ve been able to dust off my recipe…

This is seriously easy, seriously delicious, and slimming ;-) 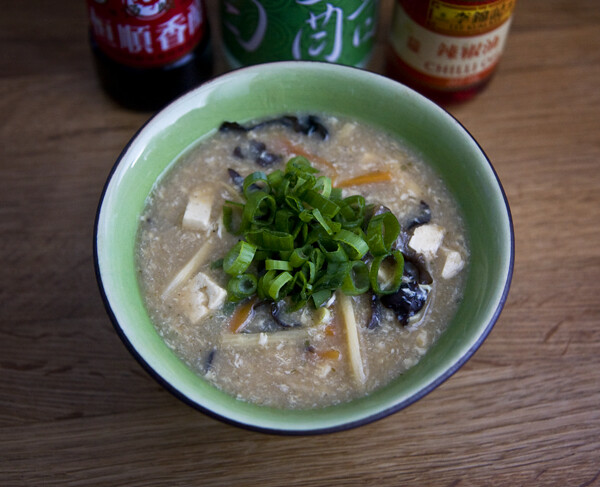 6-8 dried wood ear mushrooms
175g tofu, in small cubes
1/2 t + 3T cornstarch
1 t marsala wine
4 cups veggie stock
1 medium carrot, cut into thin strips
150g bamboo shoot strips
7 t soy sauce
7 t black vinegar
1 T rice vinegar
1/2 t white pepper
3/4 t salt
2 t chili oil
2 t sesame oil
2 eggs, lightly beaten
spring onions
Pour 1 cup of boiling water over the mushrooms and set them aside.  My wood ear mushrooms were labelled “black fungus” which is totally unappetizing, but if you can’t find wood ear mushrooms, they might be called black fungus.  I cross referenced with the latin name, “auricularia auricula-judae” to be sure.
Sprinkle 1/2 t cornstarch over the tofu cubes, then toss them with 1 t marsala wine.  Traditionally, you should use mirin, but I have no other uses for mirin, so any sweet wine will do, it’s just to give a bit of flavor to the tofu.
Once the wood ear mushrooms are soft, cut them into thin slices. Combine the soaking water from the mushrooms with the veggie stock in a large pot and and bring it to a boil. Add the tofu cubes, carrots, bamboo shoots, and mushrooms, and let it simmer for 10 minutes.

In the meantime, whisk together 3T cornstarch and 1/4 cup of water, then whisk in the soy sauce, black vinegar, rice vinegar, pepper, salt, and oils.

After the 10 minutes are up, turn off the heat, stir in the cornstarch mixture, then slowly add the beaten eggs and give the pot a few stirs so that the egg forms little strings.  Cover and let it rest for 5 minutes, then serve it topped with sliced spring onions.

This recipe is enough to feed three for dinner with little to none leftover, if you need to feed a larger group, or are big eaters, then it would probably be a good idea to double the recipe.