I woke up in the dark, not immediately remembering that we were actually in Gibraltar, then feeling completely overjoyed and giddy that I was one day away from marrying the guy sleeping next to me.  That excitement completely eclipsed the reality of our lost luggage.

One of my favorite things in the whole world are hotel breakfasts, so dirty plane clothes and missing cosmetics be damned, I couldn’t wait to get up, get dressed, and hit the breakfast buffet!  I missed my favorites… blueberry muffins and hash browns, but the coffee was french pressed, the eggs were cooked to order, the view over the Strait was quite beautiful, and we were about to go sort out the Gibraltar wedding requirements, and apply for our marriage license!

We strolled downtown to the Registry Office; it was the first time we’d actually seen where we’d be getting married.  It was basically a construction zone and I was grateful that I wasn’t a first time bride and that I hadn’t planned to wear a big white wedding gown.  This of course reignited the “is this really how we want to get married” discussions.   John and Yoko had the right idea when they flew in and out on the same day. 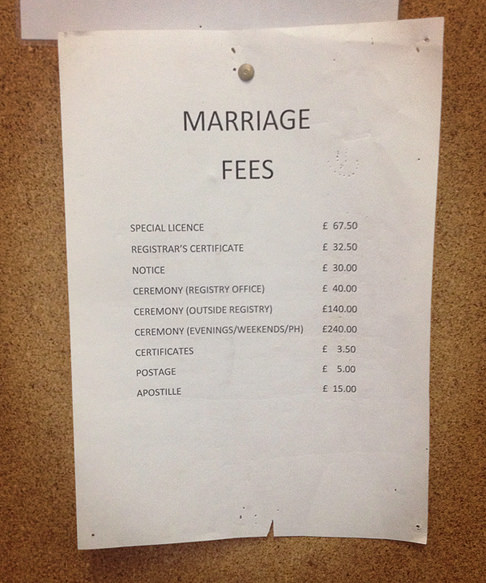 Clearly, Gibraltar isn’t the most elegant of places to get married ;-)

The Registry Office staff were extremely friendly and efficient to deal with.  They require a long form birth certificate and despite their preliminary approval of our scanned documents, we were a bit worried about whether or not they’d accept my short form birth certificate.   In 2014, my birth city still requires a self-addressed stamped envelope and a certified check or money order in order to request a duplicate birth certificate by mail… both of those things were impossible for me to provide from across the Atlantic, so we took our chances.

They verified our documents, we filled out some forms, and they sent us to have the forms notarized.  We were worried about finding a notary because we weren’t at all familiar with Gibraltar, but there was a law office with a notary less than 30 seconds walk from the Registry Office, so about 15 minutes and £20 later, we returned to the Registry Office to file the final affidavits, and the wedding was on!  The paperwork took less than an hour, which was a lot less time than we’d anticipated.  One thing I can say for getting married in Gibraltar is that the industry is well organized and very efficient.

According to the lost luggage website, our luggage was still very much lost, so we went to Main Street to find clean clothes, and replacements for our wedding day must haves.

Guys have it so easy…  Robert pretty much grabbed a 6 pack of boxers, a 6 pack of socks and beard trimmer and was good to go.

My felt-tip eyeliner pen was in the lost bag.  I love cat’s eye eyeliner, but I’m crap at doing it.  Robert builds model airplanes, which require a lot of fine detail work with paint, so one day he offered to do my eyeliner… I let him audition and hired him on the spot :)   But he’s only ever done it with a felt-tip pen from Boots and we were having a heck of a time replacing it.  As a consolation, it was very funny going shop to shop with Robert trying to draw cat’s eyes on my hand with the testers.

Gibraltar might not have a Boots, but they’ve got a Marks & Spencer!   M&S are my go-to purveyor of knickers and coincidentally, my missing wedding day knickers were of the M&S variety and while I couldn’t find the exact retro-inspired style I was planning to wear, I got pretty close.

I also managed to find a really cool maxi dress from a street vendor for £15… we were living large on that travel insurance ;-) 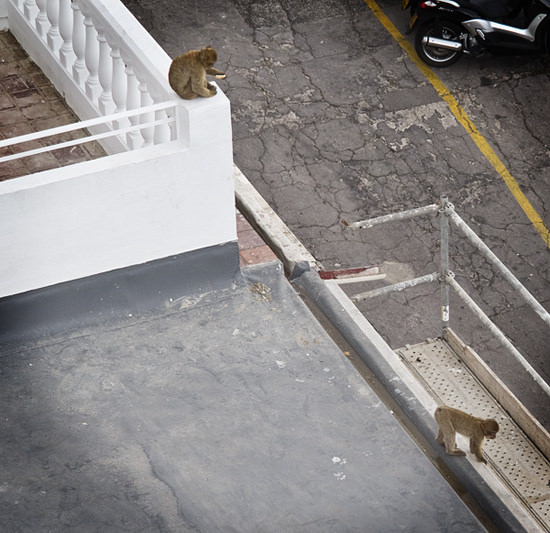 At least we had a couple of Barbary Apes to entertain us!

The people in Reception had become our compadres in this saga, always asking if we had any news on our luggage and how we were getting on.  Mid-afternoon, they called up to our room sounding as excited to tell as we were to hear that Malaga airport had called, our luggage had been found!

They helped me to get the luggage office on the phone and the guy on the other end who was Mr. Happy from the desk the day before immediately laid into me about my mobile phone not working.   We’d called out on it and I’d received a few SMS, but he claimed to have been calling me “all afternoon.”  Seriously?   I kept saying, “ok, but you’ve got me on the phone now, let’s arrange delivery.”  But he kept yelling about not being able to get through to my mobile… it was crazytown!

Once I got crazytown under control, I agreed to meet the driver in the taxi queue on the Spanish side of the border at a time that coincided with both rush hour and my manicure.