Today we continue the saga of my Gibraltar wedding…

I didn’t particularly enjoy the drive along the Spanish coast… actually, Robert says I was a “silent, brooding, thundercloud.”  The architecture and the endless billboards and strip malls reminded me of Florida, so I think we can trust his recollection :-)

He never drives faster than the speed limit and every time the GPS adjusted our arrival time, I became more certain that there was no chance we’d arrive in Gibraltar before the shops closed.  Despite months of anticipation, my first glimpse of The Rock rising into the sky ahead felt anti-climatic.  The day had beaten me.

The border queues between Spain and Gibraltar are notorious.  It can take several hours to get through but we were through in about 20 minutes.  Our first impression of Gibraltar was not good.  Actually, it looked like a dump about 30 years past its prime.   I’d gotten married in Jamaica the first time around, so the wedding bar hadn’t been set very high, but this was dire.

There are only seven hotels in Gibraltar and we’d decided to stay at The Rock Hotel because we’re big fans of Art Deco design and because it’s the most iconic… Errol Flynn stayed here, and Winston Churchill planned the WWII invasion of North Africa from here.

We knew that the hotel was undergoing a complete renovation. They’d missed their July deadline, but the General Manager had assured me that the renovations would be completed by late September.  Famous last words. 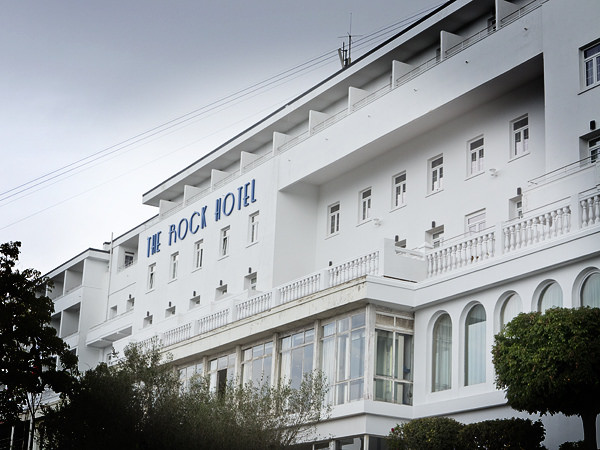 It’s not looking good on the approach…

I was expecting an elegant lobby, we’d even booked our photographer to start the shoot at the hotel, but the lobby… it was still 1985 in there!

Thankful for small mercies, we were given a newly renovated room with a balcony and a big bathtub. They must’ve known the kind of day we were having because there was champagne on ice and a plate of strawberries in the room.  Robert wasted no time pouring me a glass of bubbly…best husband, ever! 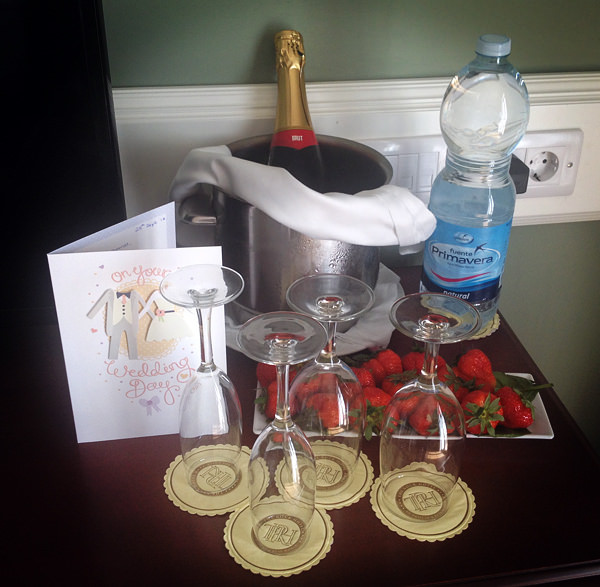 It might have been a peace offering, but it was exactly what we needed!

As we sipped champagne, looking out over the Strait, I tried to recover the excitement I’d had before everything had gone pear shaped.

I suggested a walk to Morrison’s grocery store, which from the outside looked like it might actually be big enough to have a small clothing section!  I would’ve gratefully worn a supermarket dress and knickers to the Registry Office, but no dice :(

However because Gibraltar is a British colony, we were able to find all of our English favorites… Mr. Kipling’s cakes, Branston Pickle, mature cheddar slices, salt and vinegar crisps, and pork pies (for the good Dr.).  And our everywhere favorite, Italian red wine!

One of the many things I love about Robert is that he’s always prepared for “every eventuality.”  He’d taken out travel insurance, so we had a $250 allowance to spend on “essentials” and I was able to buy some health and beauty items.  I felt a lot better after that.

Walking back to the hotel, hand in hand, discussing life on a champagne buzz, we’d concluded that Gibraltar is in fact a dump; that I need to be better at marriage than I am at wedding planning; and that from here on out Robert is in charge of all travel plans.

We also discussed various possibilities for the wedding including postponing and having it in England (or anywhere but Gibraltar) or cancelling the photographer, flowers, hair, etc. and just having it be a practical paper matter.

We had this conversation many times over the next day…