Broccoli is dirt cheap right now.  Nothing is ever dirt cheap in Denmark, so the idea of buying a pound of broccoli for less than $1 is all sorts of of novel.

Broccoli isn’t a staple in my kitchen.  I’ve basically got three broccoli recipes… general tso’s tofu, stuffed broccoli bread, and broccoli-cheese quiche, so I consulted Pinterest where I learned that most broccoli recipes are for the most part either one degree removed from rabbit food, or a heart attack waiting to happen.

Broccoli soup is a classic that appeals to me, but there was no middle Pinterest ground between bland baby food-like puree and a coronary in a bowl, so I struck out on my own.

As it was cooking, it smelled like a soup I used to serve when I was a waitress back in Connecticut. Fortunately, the taste lived up to the aroma!

So if broccoli is cheap in your neck of the woods, you might want to give this easy vegetarian cream of broccoli soup recipe a try… 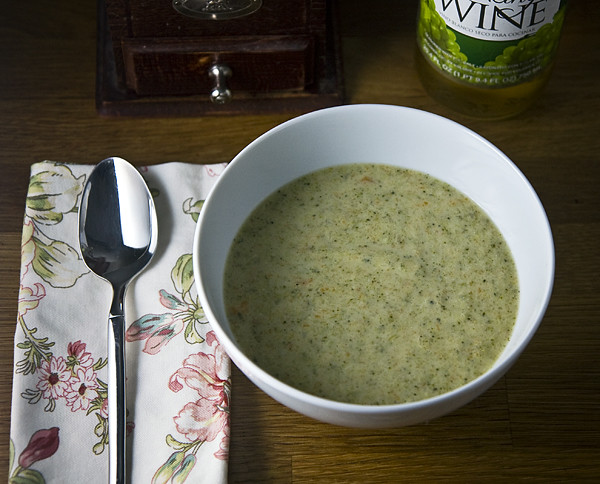 Melt the butter over medium heat, add the onions and cook them until they’re translucent.  Stir in the garlic and cook it for another minute or so, then add the flour. Reduce the heat to medium-low and cook and stir for 5 minutes or so…  until the roux darkens a bit.  Add the wine to deglaze the pan.

Gradually whisk in the veggie stock, making sure to incorporate the roux, then whisk in the milk.  Add everything except the creme fraiche and the cheese.   Bring it to a boil, cover, reduce the heat and simmer it, stirring once in awhile for about 20 minutes, or until the broccoli is tender.

Puree it to your favorite texture… I went for a full puree with an immersion blender.  Temper in the creme fraiche, stir in the cheese and cook it until the cheese melts.

I ended up with a bit more than two litres of soup… so good with garlic bread!