Denmark Prices Compared to US

So far I’ve shown you Denmark prices compared to US Dollars on groceries, and cosmetics, toiletries & spa treatments. In my last post of this series, I’ll show you the prices of liquor, dining out, and recreational activities in Denmark. 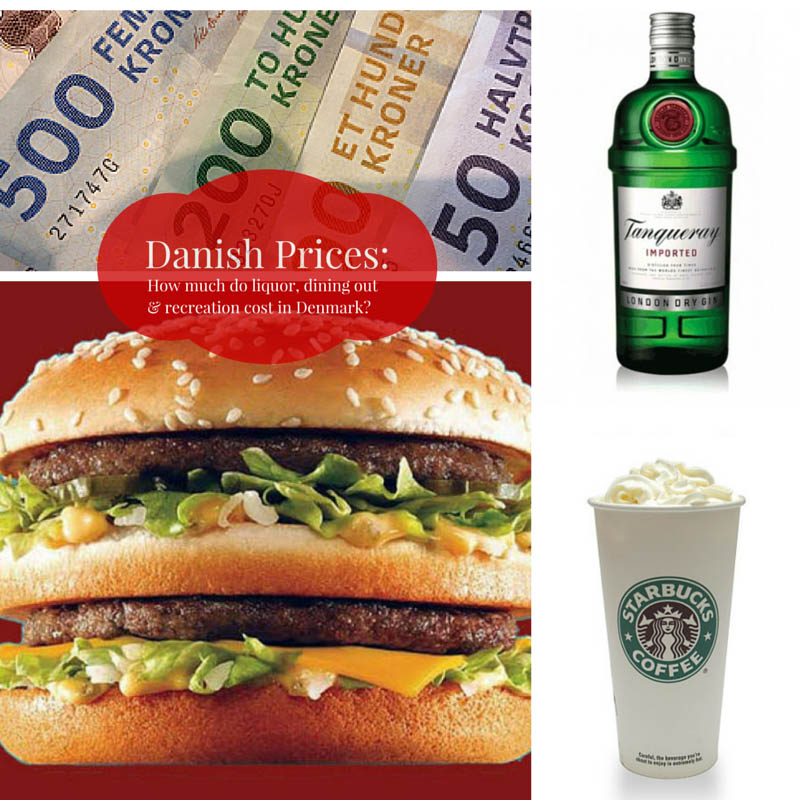 The prices given in USD are based on the average exchange rate from when I arrived in Denmark in 2010, through 2014, which is 5.60 Danish Kroner to 1 US Dollar.

Denmark Prices Compared to US: Liquor

Denmark doesn’t have many liquor stores, we usually buy our liquor from the grocery store. All of my retail liquor prices have been taken from SuperBrugsen, which is a mid-level grocery store, comparable to an average grocery store in the US, something between Aldi and Whole Foods.

Denmark Prices Compared to US: Restaurants

It’s difficult to give standard prices for independently owned restaurants, so I compared prices across mid-range restaurants and took the average price. Think of the kind of place you’d be likely to order from on a night you can’t be bothered to cook, so not something you’d choose for a special occasion, and not something on verge of being shut down by the health department.

Denmark Prices Compared to US: Recreation

Managing Our Leisure Budget in Denmark

For us, going out is rarely worth the cost in Denmark.  Many places don’t have a vegetarian option on the menu and the ones that do are usually pretty awful. A veggie burger here is often a burger with all of the toppings, minus the burger. Or a roll with a bunch of lettuce and a few tiny pieces of falafel.  Otherwise, it’s a lame pasta dish, a salad, a piece of quiche, or nachos. From time to time, we’ll try a Groupon offer, but otherwise, we save our dining out budget for when we’re abroad.

Takeaway is also expensive and not very good. If we do order in, we usually end up talking about how much better my food is than the stuff we just spent a week’s grocery budget to have delivered, and concluding “never again.” Denmark has definitely made me a better cook.

Alcohol is our biggest splurge. I couldn’t continue to live in Denmark if not for martinis and wine ;-) We invest in good wine, but always buy it on sale. I’ve got a rather big stash of a nice California Zin that I bought on offer for half price… about $9/bottle. I also keep a small martini bar, stocked mostly with things we buy abroad duty free. We drink at home, or at our friends’ homes, but we never go out drinking in bars or clubs.

Robert and I have never been to the cinema together, and we’ve never been bowling. Mini golf has become Robert’s birthday tradition, but having golfed some really elaborate courses in the US, the homemade plywood obstacles they have here are a bit of a snooze. The Oik has a fun money budget that he manages on his own, and he goes to the cinema and the local amusement park, etc. I’m also turning him into a dirty little capitalist who cuts grass, sings in a choir, and feeds Opie for cash when his Dad and I are on holiday.

By now you’re probably thinking that we’re cheap and boring… but we’re really not! It’s so inexpensive to fly within Europe, that I’d much rather cook at home and not go to the cinema, instead spending that money on long weekends in Rome, Athens, London, or wherever.

How do these prices compare to your local prices? Curious about the price of something I haven’t mentioned? Tell me in the comments :)