Becoming an expat was uncharted territory for me. None of my friends or family had studied abroad, few had even traveled abroad, so when I decided to move abroad alone, I was truly in it alone. 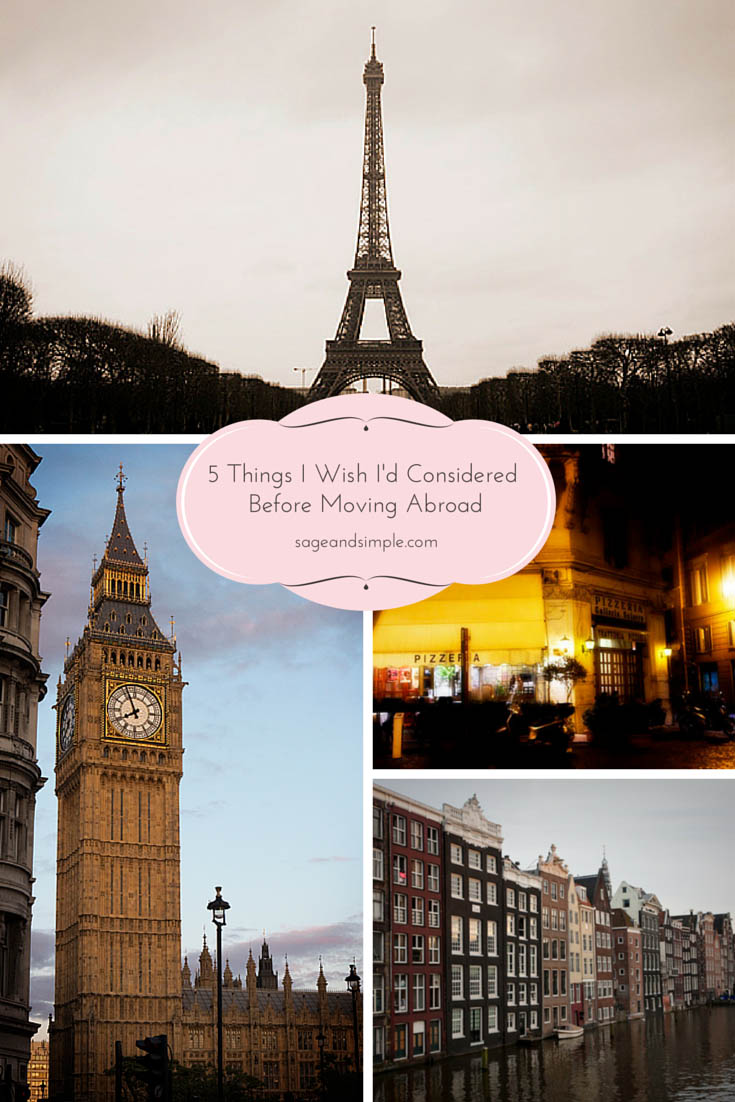 1) Know for how long you plan to stay.

If you’re like me, you’ll be so excited by the prospect of living in a new country that repatriation will be the last thing on your mind. But trust me, you don’t want to get into this without knowing how you’ll get out of it. Set a deadline for your return. If you’re a corporate relo, sign on for a finite period and make the company guarantee your return expenses. You can always extend later on, but be honest with yourself about how long you plan to stay.

I’d initially planned to stay three years, but now I’m in it for the long haul. I’ve got an English husband and all of a sudden it seems more likely that I’ll get British citizenship than move back to the States.

Have a loose logistical plan for moving back. Keep an address and bank account in your home country if possible, and know how you’ll re-establish yourself when and if the time comes. Most importantly, you’ll need a place to land. Companies are very helpful getting you relocated to where they want you, but they’re sometimes not so helpful in reverse.

If you’re moving for a relationship, it’s even more important to keep ties to your own country. I chose to move for my job… I cannot imagine being here all alone, relationship in shambles, and no escape plan. That’s not unromantic, that’s just pragmatic.  Infidelity in Denmark is huge. If you were on the receiving end, wouldn’t you want to be able to up sticks and leave?

This is perhaps the most important of all of my tips for moving abroad alone because I didn’t do it, and my life would’ve been simpler if I had.

I wanted international experience on my CV and the chance to travel extensively in Europe. It was my initial intention to achieve both of those things and be living happily back in the US before my fortieth birthday.

But then I got bored and decided to try online dating. I dated a mean Danish son of a bitch for nearly a year, then I met Robert. It wasn’t my intention to find a foreign husband and I’m so grateful that fate brought us together, but it has complicated things. See point #1. I should’ve been out of here a couple of years ago, but now I’ve got a foreign husband who married a Dane in his 20s and remains here because of his kids, which means that I’m stuck here, too. And I can’t do a thing about it any time in the near future.

The biggest barrier to my happiness in Denmark has been the country’s xenophobic attitudes around immigration. It seems like every other month the expat community is rocked by some crazy arbitrary immigration decision that ruins a family’s lives, at least in the short term. Most of these families consist of a Danish spouse, a dirty foreign spouse, and one or two dirty half foreign kids.

Danish immigration policy essentially punishes its own citizens for marrying outside of the tribe. I have more rights in Denmark as the wife of an EU citizen than I would as the wife of a Danish citizen, and that’s only because the EU forces Denmark to uphold minimum humanitarian standards regarding family reunification.

I was invited here to work, and I pay more than 50% of my income in various taxes only to feel unwelcome by Denmark’s immigration policies and rhetoric, which really makes me wish I’d stayed home. I’d probably be richer and happier.

Living in any foreign country is challenging, but before you go, make sure you’re choosing one that will treat you like a human, not one that will resent you for bringing your evil foreign culture into their pure homogeneous land. In this case, bigger is probably better. There are nearly 200 different countries in the world… choose one that wants you!

4) Connect with online communities of expats in your prospective host country.

Find Facebook groups for foreigners living in the place you’re considering, and get insights and tips for moving abroad alone straight from people who are living the experience. Ask as many questions as you can think of… you’ll get a range of opinions and experiences. Believe the good, and the bad… know that you’ll experience both extremes, and that your average experience will be somewhere in the middle.

Also look for expat bloggers, email them and get their perspective. Don’t take blogs at face value, a lot of bloggers hold back for fear of not having their visa renewed if they’re too critical of their host country. Contact them and get the real story.

And if you do email a blogger for their perspective and they take the time to reply, have the decency to thank them for getting back to you… even if they didn’t tell you what you wanted to hear. We’re busy and it takes time to answer all of the emails we receive, so gratefully receive our replies, take what we say to heart, and make the best decision for you.

Life is life wherever you go. Even if you live somewhere dreamy like Paris or Rome, it’s not going to be the same as when you visited for a week one summer, or even studied there for a semester. Having gone through the process of establishing a life in a new country, I’d even argue that being a student doesn’t qualify as being an expat because universities to some degree shelter students from the hassles of finding housing, setting up utilities, getting a drivers license, navigating the tax system, etc.

Basically, you’re going to have to deal with the same life hassles you’re dealing with now, the only difference is you’ll be dealing with them in a foreign country, most likely in a foreign language, and within unfamiliar systems, which seriously ups the stress and complexity of most situations. You’ll commute, work, go home, pay bills, shop for groceries, cook, clean, etc., except you’ll be doing it in a foreign country. Trust me… it’s nothing like being on holiday.

Expat living is not for the faint of heart. I’ve chronicled my journey on this blog. It’s been full of every emotion possible, and I’ve felt like giving up more times than I’d like to admit.

If you’re an aspiring solo expat, I hope you’ve found my tips for moving abroad alone helpful. If there’s anything you’re dying to know about being an expat, leave me a comment or send me an email and I’ll do my best to help you.

If you’re not an aspiring expat, I hope you’ve found this interesting and that I’ve reinforced your decision to stay home ;-)