London was fabulous, and I arrived in this new decade of my life with all the panache I’d hoped for!

Since most shops in Hatton Garden are closed on Sundays, I made do with a visit to Louis Vuitton ;-) I spent more than I should have on a bag I’ve long admired… and a little something for Robert, then we walked around London, shopping, and talking about the day we’ll finally buy those one way tickets to England.

We ended the day with dinner in Chinatown. If you’re ever in London, it’s really OK to skip Chinatown… there’s not much to see and even though we chose a well reviewed restaurant, the food was disappointing and of course, overpriced.

That evening brought us news of a jewel heist in Hatton Garden… serious Oceans 11 stuff! 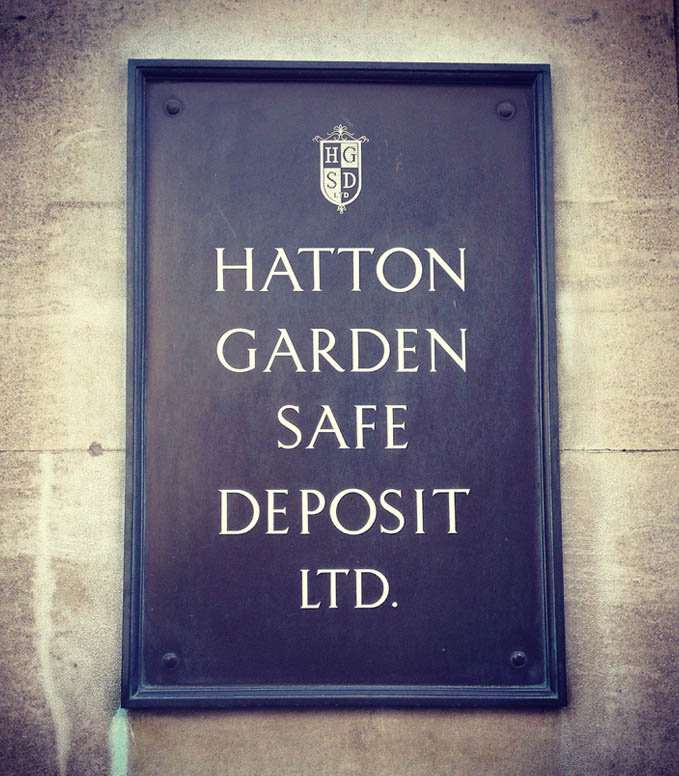 Hatton Garden the next morning had been overtaken by news crews covering the heist, but the shop windows were full of pretty things :)

I was actually there to discuss a bespoke bracelet, but there was so much Art Deco goodness in the window, that I couldn’t resist having a closer look at a few pieces!

I fell hard for that big, beautiful emerald cut Art Deco sapphire and diamond ring. After having a good look under the loupe, Robert slipped it onto my finger and said, “happy birthday, darling.”

He sure knows how to take the sting out of aging ;-)

If you’ve been reading my blog for awhile, you probably know that I name all of my jewelry. Zelda Fitzgerald was an iconic American flapper, and wife of my favorite American author, F. Scott Fitzgerald  It’s the perfect Jazz Age name for such a beautiful Art Deco sapphire and diamond ring!

Zelda Fitzgerald is an English Art Deco sapphire and diamond ring from the 1920s. The center 3.50 carat natural, untreated sapphire is surrounded by twenty old cut diamonds, and calibré cut sapphires, all set in an intricate platinum basketwork setting.

She used to belong to a woman with much bigger fingers than mine, so we went out to lunch while she was being resized. During this trip, we discovered the best ever (and oldest existing) vegetarian restaurant in London… a place on Soho Square called Govinda’s, it’s run by Hare Krishnas! How cool is that?

I’m still figuring out how to wear Zelda… like Elizabeth Taylor and Little Edie, she’s a bit ostentatious. I’ve been wearing her interchangeably with Jackie Kennedy, but it’s hard work choosing Jackie over Zelda. If Zelda had been in the shop window the day I spied Jackie, Zelda would’ve been my engagement ring. Timing is everything with antiques, and living in Denmark doesn’t help with that.

I just love imagining her on the hand of a fabulous flapper in 1920s London, maybe she even partied with Scott and Zelda, or hung out with Harry Selfridge. A very special piece for a very special birthday… start as you mean to go on, I bet this decade will be my best yet!