This buffalo seitan recipe is a house favorite!  I adapted it from a Vegetarian Times recipe for seitan hot wings.  I love and missed buffalo chicken sandwiches, so the quest for the ultimate buffalo seitan recipe began. I tried awhile back with buffalo tempeh, which I considered a success, but I’ve found that seitan is a much better substitute for wings than tempeh. 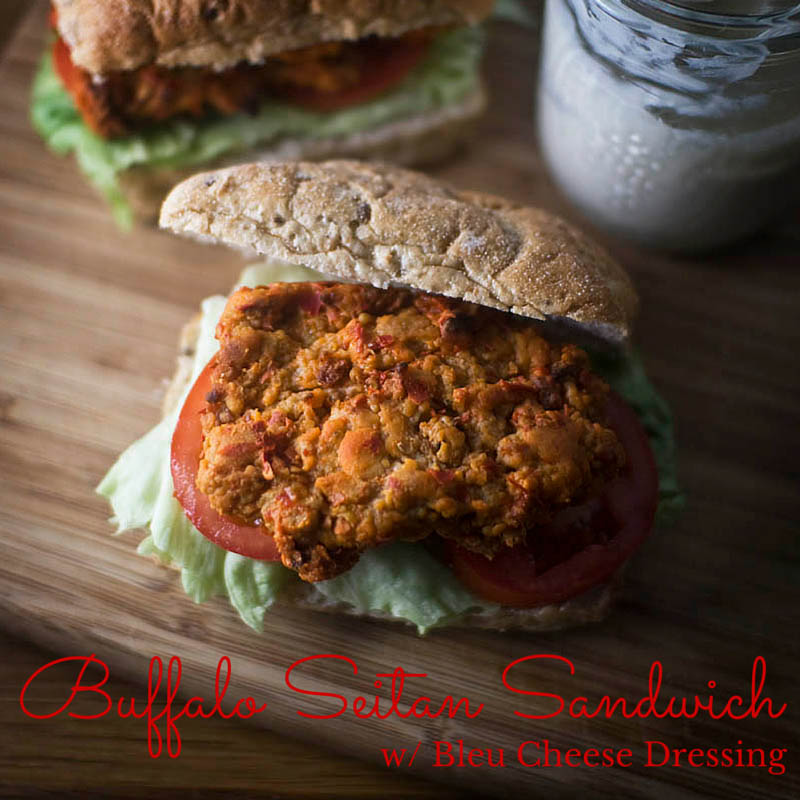 To make the seitan:

Stir together the soy sauce 3/4 cup of the broth, then add it to the other ingredients and stir it until soft dough forms. This will happen quickly; you might need to add another tablespoon or so of water in order to incorporate all of the flour.

Transfer the dough to flour-dusted work surface, dust the top with flour, and roll it out into rectangle, approx. 9″ x 14″. Cut rectangle in half lengthwise, then cut each piece into whatever size cutlets suit your bread, I go for chicken breast size.  Keep in mind that they will expand when you boil them, but it’s not a big deal to cut them into smaller pieces after you cook them.

In a large pot, bring the remaining 4 cups of broth, 1 t garlic powder, 1 t onion powder, and 1 t sambal oelek to a boil. Add seitan pieces, bring it back to a boil, then reduce the heat, cover, and simmer it for 30 minutes.

Drain the seitan and let it cool.  I transfer it to a cutting board, flipping it a few times as it cools, otherwise it’s a bit slimy.

To make the buffalo sauce:

Combine the sambel oelek, butter, and vinegar in a small saucepan.  Stir it over medium heat until the butter melts and a sauce forms, then set it aside.

To make the wings:

This is where the magic happens :)

Arrange the seitan in single layer on greased baking sheet and broil it for 8 to 10 minutes, or until it starts to brown and the edges start to crisp, then flip it and repeat.

Transfer the seitan to a large bowl, add the sauce and toss until it’s well coated.

To make the sandwiches:

Toast your favorite type of buffalo seitan sandwich bread (I’m partial to rolls and baguettes), then spread both slices with the bleu cheese dressing, layer with lettuce and tomato, then top it with a piece of buffalo seitan, and perhaps a bit more dressing. 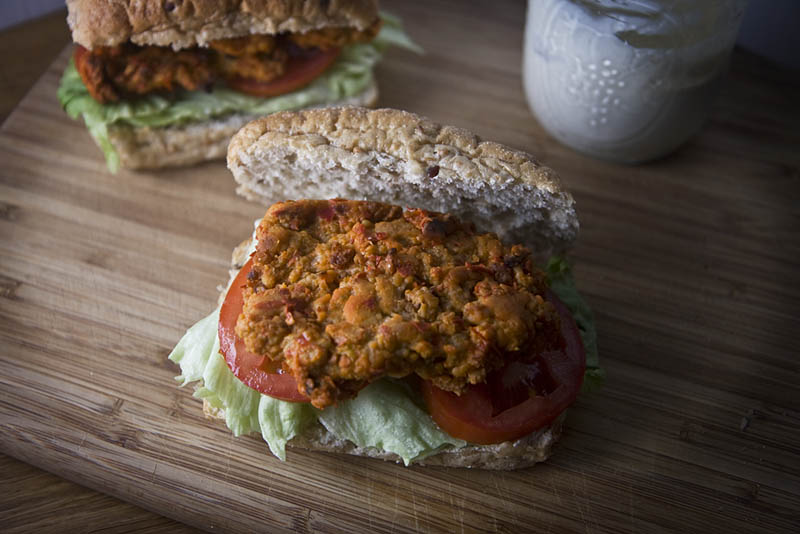 I’m off to London in the morning, and won’t be back until mid-week.  That means no Travel Tuesday, but I’ll be posting on Facebook and Instagram, so if you’re not following me there, now would be a good time :)  See you next week!

In the meantime, you should really make these sandwiches. Seriously, I almost want to open a food truck just so I can make these for people ; -)