Easter in Denmark… nothing makes an expat miss home like the holidays. Easter isn’t a big deal for me, but my birthday always falls on or around Easter, and Reese’s Peanut Butter Eggs, and York Peppermint Patties in pastel wrappers have a special place in my heart.

When I was a little girl, my great-grandmother always bought me a new Easter dress. Picking out a fancy dress was one of the highlights of my year. It felt like Easter would never come, and it may as well have been my wedding dress for as carefully as I chose it and as much as I looked forward to wearing it!

As I got older, Easter became less and less significant, until my little sister started a tradition of making me an Easter basket. Then it was special again.

The thing about living abroad is that you can embrace your local culture as much as you want, but the traditions will never be yours, and most of the holidays you’re used to don’t even exist in your world anymore.

Denmark is a country of strong traditions, and while for me, the highlight is the 5 day weekend known as “Påskeferie,” there are a number of traditions specific to Easter in Denmark that are as important to the Danes as those Easter dresses and baskets are to me. 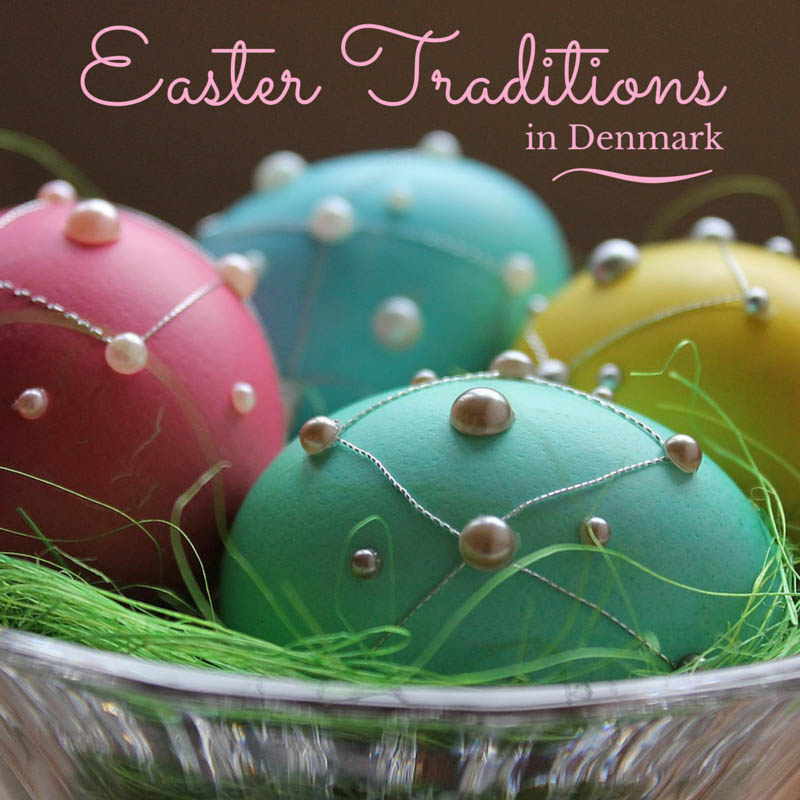 Shops are for the most part closed for the duration, except on Saturday where you may be able to scrounge together enough groceries to tide you over until things re-open on Tuesday.  Many a new expat in Denmark have found themselves ill prepared for the seriousness of Påskeferie.

When I first moved to Denmark, I heard a lot of people talking about their summerhouses.  I thought, “wow, Danes much be rich, everyone’s got a summerhouse!”  Then I was invited to Påskefrokost at someone’s summerhouse… a tiny, musty shack surrounded by other tiny, musty shacks.

Påskefrokost is Easter lunch, and it’s commonly the first event of the season at Danish summerhouses. It’s pretty much a day long meal that stretches from lunch to dinner.  It consists mostly of things vegetarians don’t eat like herring, lamb, and cold cuts.

No Danish event would be complete without copious amounts of alcohol.  For Påske, this means snaps, usually akvavit, which tastes like caraway seeds… blech!  There’s also Påskebryg, a special beer that’s launched in early March and only available until Easter.

And cake… there’s always plenty of cakes in Denmark :)

In English, these would be called “teasing letters.”  They’re letters containing short poems, and they’re signed using one dot for each letter in the sender’s name.  The recipient has to guess the name of the sender, if they guess correctly, they get a chocolate Easter egg, and if they get it wrong, they have to give a chocolate egg to the sender.

I don’t get this one, I think it’s mostly a way for grandparents to amuse young grandchildren, but doesn’t every culture have a silly tradition or two?

Eggs are also a big part of Easter in Denmark.  Eggs are often served at Påskefrokost, and egg tosses are a popular activity.  Royal Copenhagen produces a new porcelain Easter egg each year, which can be opened and filled with candy.

Speaking of candy, Danes on average eat eight kilos of sweets per person, per year.  Yikes!

Danish Easter candy fails to impress me… it’s the usual assortment of licorice in awkward combinations and lots of marzipan. Someone really  needs to enlighten them about chocolate and peanut butter!

There’s not much going on for Easter here in my world, mostly I’m just gleeful about not having to go to work.

In Denmark, we get 6 weeks of paid leave per year and the year runs from May to May… that means I have to use up all of my days by May 1, or I’ll lose them.  So I’ve stacked my remaining days against the Easter holidays and I’m off work until April 20th!!!

Happy Easter, if you celebrate… and please eat a Reese’s Egg and a pastel wrapped York Peppermint Patty (or two) in my honor :)