I’ve been missing Greek food pretty much every day since I got off the plane from Athens back in January. Seriously, go to Greece, if just to eat… you won’t be disappointed!

Since I can’t go back to Greece just yet, I decided to bring a taste of Greece to Denmark by making gyros. Gyros are typically made with roasted meat, so I took a bit of a creative license and deemed marinated and roasted tempeh as the candidate most likely to succeed in a vegetarian gyros recipe. 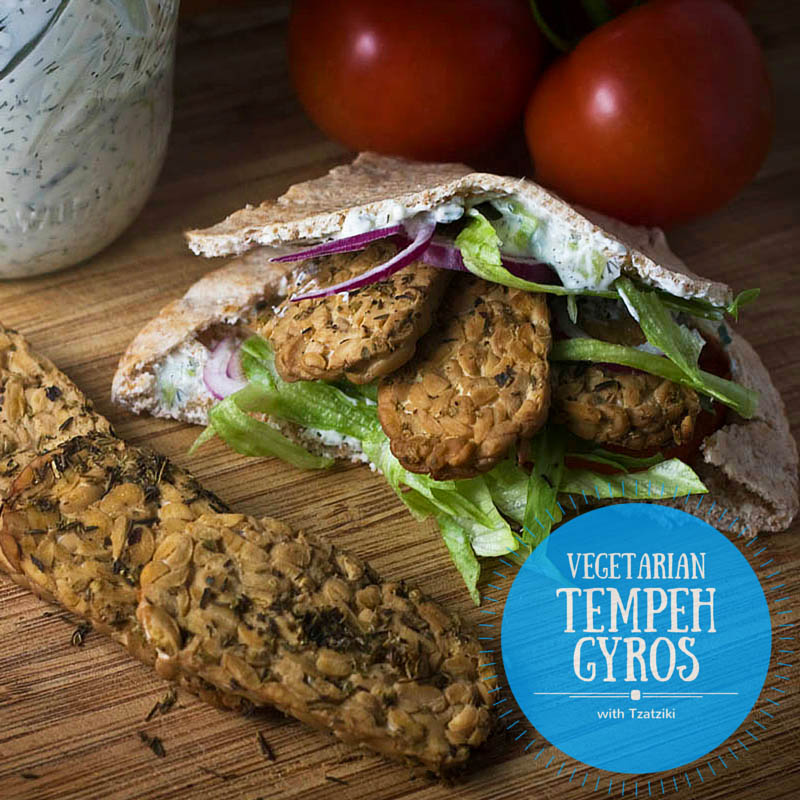 This recipe will go wrong if you don’t marinate the tempeh for long enough, so plan a day ahead and let it mellow for at least 12 hours.

Cut the tempeh into 1/4-inch thick slices, add it to a pot of boiling water and let it simmer for 15 minutes.

Drain the tempeh and transfer it to a plastic bag, pour the marinade over it, seal it, and refrigerate it for at least 12 hours… the longer the better. You can also marinate the tempeh in a shallow dish, but the marinade won’t completely cover the tempeh, so you’ll have to turn it a few times, and I find that the bag method saves a bit of faffing around.

Once the tempeh is sufficiently drunk on marinade, take it out of the fridge and let it warm to room temperature. Preheat the oven to 200 degrees (400 degrees fahrenheit). Cover a baking sheet with parchment and arrange the tempeh in a single layer.

Brush the tempeh with some of the leftover marinade and bake it for around 30 minutes, turning it halfway through, and brushing it with additional marinade until it’s crisping at the edges, and starting to brown.

I was going to use the Moosewood tzatziki recipe, then I remembered that I have a Greek friend!  So I got in touch with Lenia and she was kind enough to give me the authentic tzatziki recipe she was taught by her grandmother Sofia (ευχαριστώ, Lenia & Sofia!).

I love having friends all over the world, especially when they’re willing to share their food secrets with me ;-)

Here’s Lenia’s grandma’s tzatziki recipe… I had high expectations, and it didn’t disappoint :-)

I actually shredded the cucumber in my Cuisinart, but Lenia said to chop it into very small pieces. Put the chopped/shredded cucumber into a strainer and weigh it down to press out as much water as possible.  I added a bit of salt to help it along, then after awhile, I sort of wrung it out.

Mix everything together, adjust the garlic and dill amounts to suit your personal preference, then refrigerate it so the flavors have a chance to mingle.

Wet the pita bread, and warm it in the oven.  Spread the inside with tzatziki, then stuff it with sliced tomatoes, sliced red onions, shredded lettuce, and the baked tempeh. 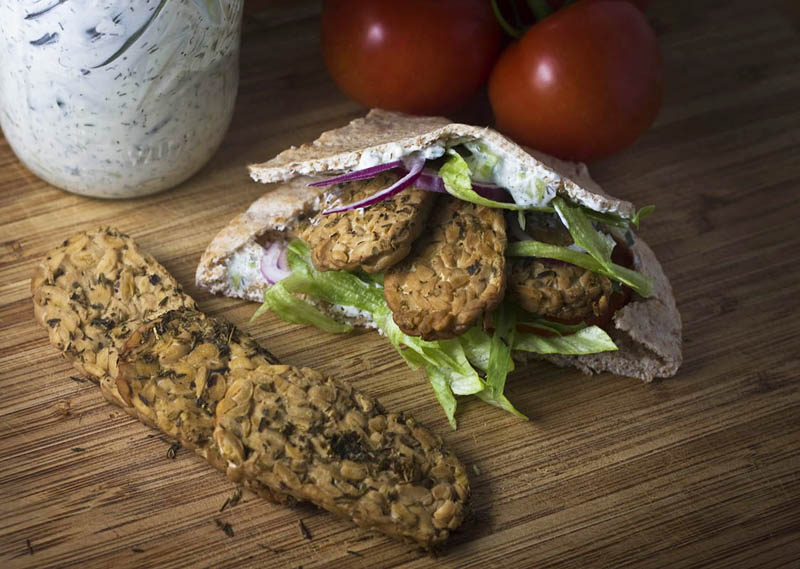 I think this vegetarian gyros recipe is my new favorite way to eat tempeh, and I hope that one day it will get Lenia’s seal of approval :-)