Marrying Robert has given me the gift of permanent residency in Denmark, and it’s transferrable to other countries! I’ve got a golden ticket to knock around Europe for the rest of my life :-)

My initial Denmark immigration visa had an expiration date and was tied to a specific job, so if I’d changed jobs, I’d have to reapply. If I’d quit or lost my job, I’d have 3 months to find another one deemed ‘acceptable’ by the government (e.g. lucrative enough to line their coffers at an acceptable rate), or else I’d have to leave the country.  Each time my Denmark Immigration visa came up for renewal, they could’ve chosen not to renew it and set an arbitrary date for me to leave. As a Danish property owner, this caused me much anguish; as a highest rate tax payer, it made me angry. Denmark immigration visa

After five years, I could’ve applied for permanent residency on my own, but the flaming hoops I’d have had to jump through were more than I was willing to take on. That path to permanent residency would’ve tied me to Denmark, and I’ve been honest over the years that Denmark and I are not a match made in heaven.  So I’d been leaving my future to fate.

I’m grateful every day that I found my Englishman in a sea of Danes. Marrying a Dane would’ve been more trouble than it was worth.

I’ve met a lot of expats over the years and among them are some who came to Denmark for work, married a Dane, had kids, and are still on a work visa because it’s easier than trying to get a family visa! Is that crazy or what? For such an enlightened country, you’d think that having your spouse with you would be a basic human right, but apparently not if you dare to marry outside the Danish tribe.

Should a Dane decide to import a spouse, their living accommodation and lease must meet certain criteria, and they must put up a deposit of around $10,000, lest they hit dire straits and decide to cash in on Denmark’s much lauded social safety net. Banks actually offer guarantees to couples who don’t have a spare $10K hanging around, and after financing everyone else’s safety net, who does?

The spouse must pass their first language test within 6 months of entering the country… ya know, because adjusting to married life and a new country, while trying to find a job with the government breathing down your neck is so easy.

There’s also an integration contract the spouse must sign, swearing that among other things they understand that terrorism is wrong, that it’s not ok to beat their spouse (or be beaten), and that girls have as much right as boys to go to school… alrighty, then!

Whether you’re married to a Dane or came here to work and want to stay, the Denmark immigration visa requirements are exactly the same.

A few years ago, I was trying to discuss Danish immigration policy with a date.  When I told him I’d have 3 months to leave Denmark if I lost my job, he said, “we’d get married at once.”

This was hilarious for two reasons: 1) It wouldn’t change a thing about my immigration situation. 2) It was our second date.

He didn’t get a third date.

Permanent Residency in Denmark by Marrying an EU Citizen

Compared to the bollocks I mentioned above, getting my permanent residence permit was a magic carpet ride. When dealing with EU citizens, Denmark has to play by EU rules :-)

Since I’d already lived in Denmark on a work visa for five years when we applied, I was immediately eligible for permanent residency.

EU applications for a Denmark immigration visa are processed by the State Administration, which is a lot nicer and friendlier than the Immigration Service. We showed up without an appointment, handed in some forms, a copy of our marriage certificate, and my current visa; a few months later, my permanent residence card came in the mail. 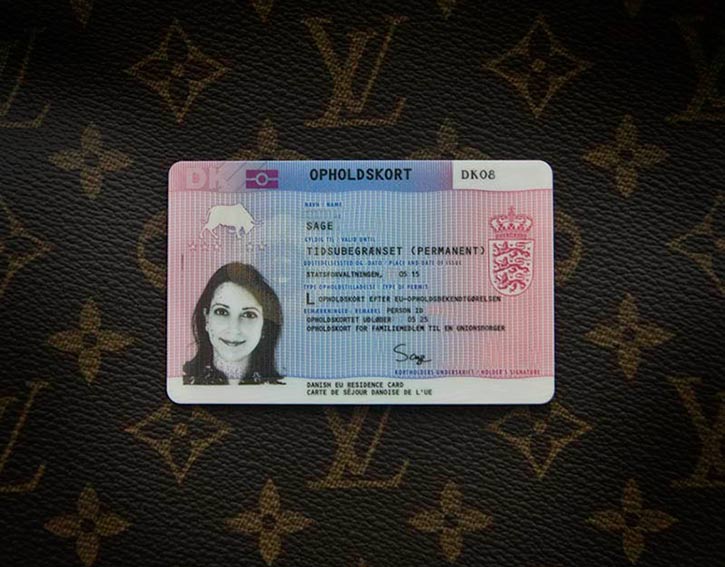 There was no security deposit, no language requirement, no integration contract, and no application form asking questions like:

What does permanent residency change?

For the first time in five years, I feel settled. Denmark is just a temporary stop for us, but knowing that when I leave, it will be on my terms is incredibly liberating.

My sister is my only tie to the States and having been gone for five years and a bit and only going back once, I’m not sure I’d want to repatriate. I think five years away is enough to alter my thinking and lifestyle enough that I wouldn’t fit in. The weird thing about being a longterm expat is that I feel like I don’t belong to either place. Most days, I just don’t feel at home and I wonder if I ever will again.

In a few years, we’ll emigrate to England, and that’s pretty much the one place I can’t transfer my permanent residency to. Figures, right? But England’s immigration requirements seem to be of the ‘throw some money at it’ variety, so I’m not too worried. But the clock will restart, and I’ll be on a temporary visa for the first five years, then I’ll apply for “indefinite leave to remain” and if all goes according to plan, I’ll become a British citizen, and then maybe, I’ll finally feel at home.

But for now, I don’t have to worry about “what if” because no matter what happens, I can stay here in Europe with my husband.

Denmark, you are stuck with me!