One day shortly before Christmas, I got an email touting a last minute Mediterranean cruise deal that was too good to pass up. Robert and I had a fabulous time in the Norwegian Fjords last summer, and we thought some time on the Mediterranean was just the thing to help us get over the disappointment of the failed England move and the stress of house hunting in Denmark. So, I booked an eleven night cruise at a bargain rate in a Norwegian Epic aft balcony stateroom.

This plan had a few fatal flaws:

Cruising seems to be a love it or hate it kind of holiday and after sailing a much smaller ship in Norway, I had no idea how anyone could hate cruising! We’d slept in, and had a lovely sit-down breakfast each morning, followed by an equally lovely lunch with wine, a walk around the promenade deck, followed by gin & tonic and watching the scenery from the back of the ship, followed by a pre-dinner martini, another lovely sit-down meal, and a nightcap. Our room steward knew us by name, and so did the bartenders. I’m pretty sure if you ask me in 50 years about the best days of my life, those seven days will be one of the highlights.

However, after spending eleven dire days in a Norwegian Epic aft balcony stateroom, I can see why people hate cruising! Getting our first glimpse of the ship was my first “oh shit” moment. It wasn’t a ship, it was a floating monstrosity! The Norwegian Epic was hideously ugly… from the dreadful hull art to the twisting mess of water slide tubes on the lido deck, to the far too many balconies that ran along the sides of the ship like prison cells, it was abysmal.

Once aboard the ship, most of our fellow passengers headed to the buffet, but we headed for a sit-down meal in O’Sheehan’s, the Irish pub, where there wasn’t a single vegetarian item on the menu… not even a salad. I asked about a veggie burger, and our waiter reluctantly granted my wish. Roberts often says, “start as you mean to go on” so I ordered a Hendrick’s and tonic, and was delivered a vodka and tonic, so I went to the bar to fetch a replacement and saw that they didn’t have Hendrick’s. That explained a lot, but they could’ve substituted Bombay Sapphire, Tanqueray, or whatever, but don’t give someone vodka when they’ve asked for gin! Later on, they were out of tonic, so they gave me soda water. I felt bad about wasting the drinks, but I’d feel worse about wasting calories on a drink I didn’t enjoy.

Speaking of waste, a few days later, I saw the kitchen crew breaking down the omelette station in the buffet, and they dumped all of the leftover veggies, ham, cheese, and eggs into a giant trash bin. That made me sad, but I digress…

We had a gorgeous sailaway, just the two of us on our ugly Norwegian Epic aft balcony, watching the lights of Barcelona get farther and farther away, until they were replaced by stars. Dinner was unremarkable, annoying due to the too loud live band that insisted on serenading us, and quite unsatisfying. All I had was a salad, baked aubergine, and a tiny spot of flourless chocolate cake, so I was pretty hungry when midnight rolled around. Robert suggested O’Sheehans for a veggie burger… what a fabulous idea!

Only this time, my fairy godfather waiter wasn’t on duty, so no veggie burger for me! I asked the waitress what they had for vegetarians and she said, “this is an Irish Pub, we don’t serve vegetarian food.” Nevermind that English Pubs in England (which is a lot closer to Ireland than the Norwegian Epic) usually have several vegetarian options!  So I asked where onboard I could find something vegetarian at that time of night, and she said I should’ve gone to the main dining room earlier. Nevermind. I asked for an order of fries and called it a night.

The next morning, Robert and I awoke around 9:00 to the overly chipper voice of our cruise director over the PA, and the unpleasant fact that we’d missed the two hour window for sit-down breakfast and would need to join the scrum in the buffet if we wanted breakfast. Now before we’d even headed to Barcelona, we’d agreed that we would not eat in the buffet. An afternoon ice cream, maybe, but meals were a no-go.

The buffet was also our only lunch option. *sigh*

The buffet was everything we’d hoped it wouldn’t be. A woman stood at the entrance with a spray bottle of hand sanitizer saying, “washy washy, happy happy” before spraying people on their way in. People refilled their water bottles at the drink machines. There were people scrambling around with plates piled high, coughing into their hands then touching the serving utensils. People sneezing without using kleenex… ick! No amount of “washy washy” theatre was going to help that mess!

It was an unexceptional day. The weather was overcast, and it was too cold to hang out on our Norwegian Epic aft balcony, so we walked around the ship as they tried to sell us all manner of artwork, handbags, perfume, bingo cards, botox, acupuncture, jewelry, etc. Cruising NCL is like flying RyanAir, except you don’t get to land and leave after a couple of hours.

In retrospect, unexceptional was pretty ok. The sea was starting to pick up, and I was starting to feel ill. By the next afternoon, I was in the gift shop shelling out $20 for acupressure bands. Thankfully, they seemed to work.

That night we sailed though a hurricane, complete with lightening, 78 MPH winds, and 12 foot waves! So much for a romantic night watching the moonlight on the water from our Norwegian Epic aft balcony, I was in bed thinking I was going to die as things rolled around our cabin!

Fortunately, the next day was a port day, but the problem with floating resorts is that they’re impractical, so they have to dock a million miles away from everything. So after you queue for a thousand years to get off of the ship, if you didn’t book a shore excursion through the cruise line, you have to pay for a bus to town, then a train or another bus to the port they’d advertised… e.g. “Rome” is actually 50 miles from where you dock! And if you’re late, they’ll sail without you as some of our “Florence” shipmates learned the hard way.

The next day was a sea day. Pretty much every second day was a sea day, and while getting off the ship is a huge anticlimax, the Norwegian Epic feels like a very large hotel where every other day, they lock the doors and won’t let you out. And OMG, it’s boring! We could not believe the number of bored English people reading newspapers around the ship. It was so awful that Robert and I seriously discussed getting getting off the ship in Naples and flying back to Denmark!

We talked to quite a few fellow passengers during our incarceration, and none were very impressed with the ugly Norwegian Epic, or what was on offer. A promenade is an age-old cruising tradition, but the Norwegian Epic doesn’t have a promenade deck! It’s got a deck on one side of the ship that is mostly covered by lifeboats and looks more like a crew passageway than anything you’d romantically stroll. 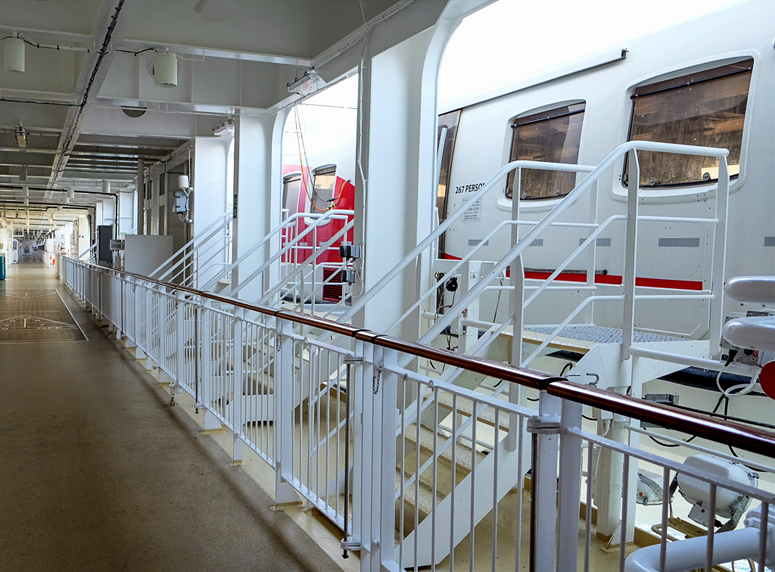 Unimpressed with the evening’s dinner menu, we decided to venture back into the buffet. At this point, we’d given up on O’Sheehan’s because every time I went in and asked for a veggie burger, they veggie-shamed me and I’d had enough of that crap. The buffet was as unappealing as usual, but they served up veggie burgers without an attitude, and beggars can’t be choosers.

The next morning, I woke up with a sore throat… the washy washy theatre had failed me and I was anything but happy happy! I did my best to ignore it, then I tried to kill it with gin and vermouth, but the following morning I woke up with the virus from hell. I was full on, can’t lift my head from the pillow sick! I haven’t been that sick since I was a kid. Robert mostly left me alone in the cabin, but checked on me every so often, bringing me ice water and soft drinks, which I barely touched. I was too ill to read and too ill to watch TV, so I just lay there, drifting in and out of sleep in our lovely Norwegian Epic aft balcony stateroom, and becoming more and more upset over the fiasco this holiday had become.

Meanwhile, Robert was in his own holiday hell. Not a fan of the buffet, he’d opted for dinner alone in the main dining room. As if dining alone on holiday wasn’t awkward enough, he was asked twice if he wanted to share a table, then a photographer came by and asked if he wanted his photo taken… ya know, so he could remember the time he dined alone on a trashy cruise ship while I was upstairs suffering from mega ship buffet virus! After that, he went to the martini bar to drown his sorrows, and our regular bartender asked where I was. He said I wasn’t feeling well, and she said, “you’ve had a fight!”

She was just trying to be friendly, but how awkward! What if we’d actually had a fight? Oh, Norwegian!

And for the life of me, I don’t know why the cruise line is called “Norwegian” because for better or worse, it’s a very American experience. But once you’ve boarded, you’re a “Norwegian” and at every turn, there’s some inane messaging telling you that Norwegians make a night of it, or Norwegians get rewards. Even after I’d gone home, they sent me an email saying, Norwegians remember every moment.

Anyway, I was deathly ill for that one day, then left with a lingering cough that I’ve tried to ignore, but that still plagues me as I write this. The rest of the cruise pretty much continued in the way in which it started, though we had warm temperatures, a clear sky, and calm seas on the last night. We stayed up late on the balcony and even saw a shooting star!

Then at 8:30 the next morning, they hustled us out of our stateroom and off of the ship, and we weren’t the least bit sad to see the last of that awful Norwegian Epic aft balcony stateroom.

P.S. We talked a lot about the house while we were away and we’ve decided not to make an offer. It’s a beautiful house, but there are fatal flaws in the layout, and we don’t think that it will suit our lifestyle in the longterm. It was a tough call, but I think it was the right one. We’re seeing some places later in the week :)

P.P.S. Our travel agent at American Discount Cruises sent us a lame form letter email saying she’d hoped we’d made lots of memories on our trip, and asking how it went. I sent her a link to this review and haven’t heard a peep since. Marketing fail ; -)